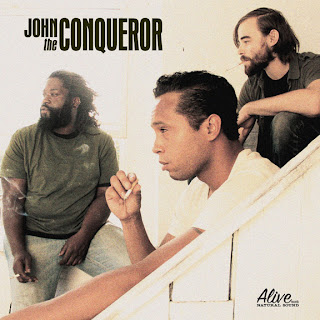 John The Conqueror is a Philadelphia-based blues/rock trio: Cousins Pierre Moore (vocals & guitar) and Michael Gardner (drums) are originally from Jackson, MS, while bassist Ryan Lynn is a native of Philadelphia. They are working in the same general territory as The Black Keys and Dirtbombs - blues/rock with a little (or a lot) of added spice. Between the two, Moore's vocals seem a little more soul-based than Black Key Dan Auerbach's blues style... not surprising given a provenance of Mississippi crossed with Philly.

Make no mistake, this album (their self-titled debut) rocks hard, throughout. The guitar intro on "Lucille" is scorching, leading into a stomping rhythm section backing strong multitracked vocals and a nearly psychedelic guitar line. If you remember what you've always liked about rock music that hews close to the blues and soul traditions, you will be well-disposed to enjoy what JTC is doing.

There's also a punk influence, best heard on stuff like the fast guitar intro to "Say What You Want", which is a 2:25 rant that keeps a high energy level throughout. Here's a taste:

And here is video they made while recording album cut "I Just Wanna", another good representation of their style:

It's on Alive/Naturalsound, which has not let us down yet... we've featured labelmates Lee Bains III, The Buffalo Killers, Brian Olive, Left Lane Cruiser and Radio Moscow. John The Conqueror is a welcome addition to that roster of hard-rocking bands, and heir to the Alive/Naturalsound tradition started by The Black Keys themselves.

Man I freaking love this album. I'm looking forward to seeing them next Monday night (11/19) at Slim's in Raleigh.

Oh yeah, and Alive/Naturalsound is also home to one of my favorite bands of the last 10 years, the Bloody Hollies. Here's to a great label continuing to knock it out of the park.

On the playlist. I would have been even more effusive. Hope I can see them at Schuba's this week.