REVIEW: Guided by Voices - The Bears For Lunch 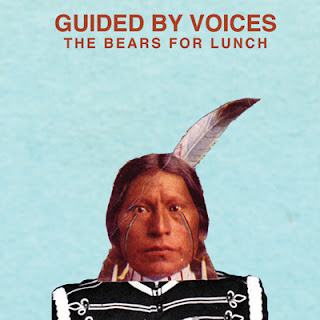 The Bears For Lunch, which is Guided by Voices' third album of 2012, is also their best of the year... and perhaps their best in quite some time. From the beginning of full-on rocker "King Arthur The Red", this is the sound of a band that is hitting its stride - well past last year's "Can they still do it?", well into "Well, hell, maybe they can do it as well as they ever did!" Certainly, Pollard's solo records in 2012 have kept up the quality, but there is still nothing like a Guided by Voices record.

Listening to the breakneck rhythm section and guitar riffing on that opening track, one has the impression that Pollard has done what might have seemed impossible. He has reunited with Tobin Sprout and brought production values that GbV really only started to employ after this original lineup broke up. But even better than merely having the old gang play the old songs in a new way, they've cranked out 19 terrific new songs.

It's not for me to pick out highlights - the whole thing's a highlight - but "Hangover Child" is terrific, with a heavy riff and multi-tracked vocals in Pollard's trademark British accent intoned over what sound like at least six or seven changes in a little under 3 minutes. And the next cut, "Dome Rust", is full of punk-inspired guitar riffs... later on, "White Flag" is a heavy guitar rocker in the tradition of "Official Ironmen Rally Song" or "Not Behind The Fighter Jet". Here's "White Flag":

Here's another one of my favorites, "Everywhere Is Miles From Everywhere":

The Tobin Sprout tracks, including "The Corners Are Glowing", "Skin To Skin Combat" and "Waving At Airplanes" are as pretty and smile-inducing as the best songs Sprout has ever contributed to GbV. Sprout's gentle vocals and some sweet string sounds lead toward about a minute-long outro of psychedelic rock guitar on "Corners", and the impossibly high multi-tracked Sprout vocals of "Skin To Skin" over growling electric guitar are terrific. The vocals on "Airplanes"... just beautiful stuff.

If you're a fan, don't waste any time. If you're not sure, you can check it out for yourself and see what all the fuss is about. The record is out tomorrow on Guided by Voices, Inc. - you can buy at GBV Digital or you can order a cd or vinyl at Rockathon Records.

Also, if you look on iTunes, you can find three of the songs with B-sides available to buy.