REVIEW: Rich Hands - Out Of My Head 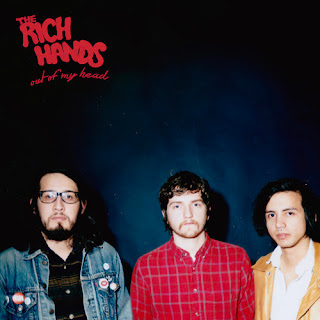 The Rich Hands' Out Of My Head seems destined to become a garage-rock mainstay for this summer. It features blazing guitar runs pushed into the red, a racing bassline, punk backbeats and snotty vocals - in short, it's just about a perfect garage-rock album. These guys are from San Antonio, and maybe it's not a coincidence that they throw in a psychedelic touch in the form of Farfisa-style organ - coincidence or not, it helps make this one of the most fun records you'll hear this summer.

Here's the video for "Teenager" - superfast drumming with a catchy backbeat kicks it off strong, and like The Ramones, Kiss or Stooges, they seem to take some pride in making loud, catchy hard-rocking music without too much to say:

They're a trio: singer and guitarist Cody Mauser, bassist Matt Gonzalex and drummer Nick Ivarra. They met and bonded in high school over a love of punk, classic guitar rock and, in their words, "that raw, simple feeling of having a good time without the melodrama.” They draw from a variety of influences -- isn't that "Like a Rolling Stone" they've used as a taking-off point on "No Harm Blues"? Probably the best track is the last one - "I Get By", at 3:40 the longest one on the record, they stretch out a little more on the guitars and vary the tempo a couple of times. But nothing too complicated. That's not the point here - fun is: theirs and ours. Turn it up.

As a bonus listen, here's a non-album B-side "Take Me Away":

The album is out now (released May 6) on Fountain Records, cassettes on Burger Records.