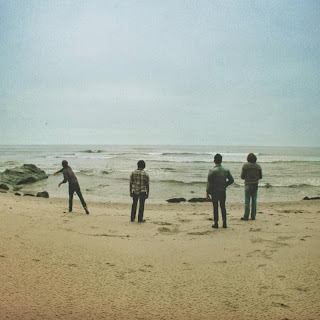 The Donkeys' newest album is Ride the Black Wave, and it is their best yet - not surprising from a band who clearly enjoy playing together and support one another seemingly effortlessly. The album starts out with a sweet, melodic, psychedelic acoustic intro that wouldn't be out of place on a number of Clean records. "Sunny Daze" is a terrific laid-back number. Following immediately is a retro-surf instrumental "The Manx" - well, it's mostly instrumental, but has some la-la's in the chorus, and they usher the song out on a gentle wave... There are some tracks here ("I Heart Alabama", "Brown-Eyed Lady") that lean country - these guys have always been a bit difficult to pin down "genre-wise", which makes their albums more unpredictable and enjoyable. Well, a bit predictable, in the sense that they have a great way with a gentle guitar riff and know how to layer in harmony vocals. Check out "Scissor Me Cigs":

The album was recorded at San Diego’s Singing Serpent and mixed by LA’s Thom Monahan, and they mention their home state prominently in at least two of the tracks here - asking the question "should I stay in California?" but in a way that says the answer is already known. They might go out on tour, but they're always coming back. In fact, it occurs to me that the "black wave" of the title might refer to the road -- the adventure of traveling around the country playing music, knowing that as long as you know how to ride it, the road, like the waves, will always bring you home. Check out their video for the track "Blues in the Afternoon":

The sequencing of this album is masterful - because they vary the instrumentation and tempo (and even the volume level) somewhat, they take advantage of every opportunity to change things up, closing with "Shines", a truly outstanding track not quite like any of the ones that precede it - featuring an easygoing guitar riff, swells of Hammond organ and warm, soulful vocals, it calls to mind influences as disparate as The Grateful Dead, Shuggie Otis and The Byrds. It's the perfect way to end the album, just as "Sunny Daze" was the perfect way to open it.


Ride the Black Wave is out now (June 3) on Easy Sound Recordings.