Sacred Paws - Run Around The Sun 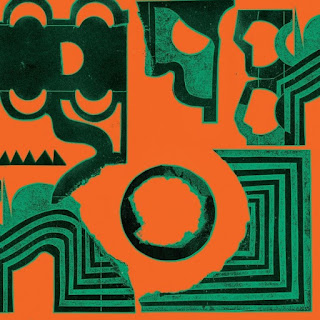 We aren't habitually demanding.  But we believe that we, and our readers, deserve at least one new album for each weekend that will make them happy.  Is that too much to ask for?  We don't think so.  And fortunately for us (not to mention salvaging the theme of this feature), Glasgow-based Sacred Paws agrees with us.  Run Around The Sun, their second LP, arrived today, and it is an adorable package of intertwined vocals, clever melodies, solid rhythms by Eilidh Rodgers, and really, really superb highlife-influenced guitar by Rachel Aggs.  Relentlessly upbeat, fast-paced, and even employing horns and keys on several tracks, these songs banish every negative thought that has invaded our consciousness.  This is music in bright colors and bold textures, but delivered with a light, nuanced touch.  Rachel and Eilidh both are or have been members of other bands that we have covered (e.g. Shopping and Golden Girrrls), but in our view this collaboration clicks like few bands we have covered.  The songwriting is top shelf, the performance chemistry is polished, and the energy and conviction in the songs is palpable.  The result is in the music, and this will be one of our favorite albums of this year.

Run Around The Sun is out now via Merge Records in North America and Rock Action Records in the UK/Europe.