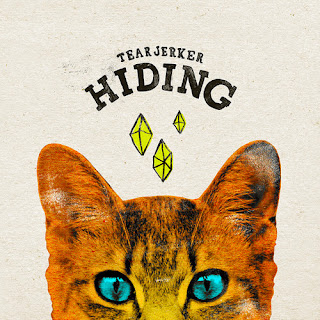 Tearjerker is a Toronto-based 3-man band (Trevor Hawkins, Micah Bonte and Taylor Shute) playing exquisitely crafted music along the lines of Galaxie 500, Slowdive, stuff like that. They've just released a 4-song EP in advance of a full-length due out later in 2014. They specifically mention that all three members share writing duties, but it's Bonte on vocals and guitars plus Shute on guitars, bass and keyboards, and Hawkins on drums and "samples".

The opening track, "Door", calls to mind some of the best things I recall about Sparklehorse - Bonte's vocals and the electric guitars take their time rising above the subtle wall-of-sound mix (which includes beautifully strummed acoustic guitar and banjo), but when they do, the song really soars...

and from that starting point, the balance of the EP carries on in similar fashion - this is music that rewards repeated listening, and it's just as enjoyable if you've got it on in the background or are intently trying to figure out what is making this or that specific part of the mix.

Here's "You Can", the closing track - a great example of how they build these songs... although the songs seem to just grow and fill out effortlessly:

It's absolutely beautiful rock music. Now I'm eagerly anticipating that album, but this generous 4-song EP (over 20 minutes) is plenty to enjoy while waiting. Go to their website and check out some of their earlier music, too.