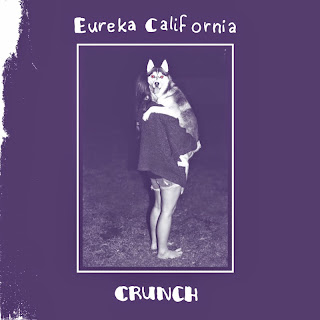 Crunch marks the 2nd Eureka California album in 18 months. Their previous album was Big Cats Can Swim - WYMA post here. Like that one, this one has plenty of guitar fuzz and in-the-red vocals from Jake Ward and features the excellent drumming of Marie A. Uhler. They sound like kids who got a lot out of the time they spent listening to every punk and lo-fi postpunk record they could get their hands on - Ramones, Stooges, Replacements... with a healthy dose of power-pop (Peter Case, maybe)... but in synthesizing influences, they put together a distinctive sound. The opening track "Edith (One Day You'll Live In a Bunker)", and in fact, several tracks on this record, put me in mind of The Violent Femmes - there's an unapologetic fury, leavened with a sense of humor and self-deprecation, and the ability to generate a ton of noise, sometimes with nothing more than a drum kit, acoustic guitar and vocals.

But that's an incomplete comparison, because some of the heavier stuff more closely resembles Propeller-era Guided by Voices. Check out "Happy Again":

And as an added bonus - not on this album but recorded as an outtake from Big Cats Can Swim, here is their reverent, ragged cover of GbV's "Game of Pricks":

I've heard a lot to like on their first two albums - not only the irrepressible spirit that Eureka California shares in common with some of those musical precursors, but some real musical talent and the ability to write some catchy guitar hooks. You don't find that combination every day, so celebrate when you do. It's on Happy Happy Birthday To Me Records, out of Athens.