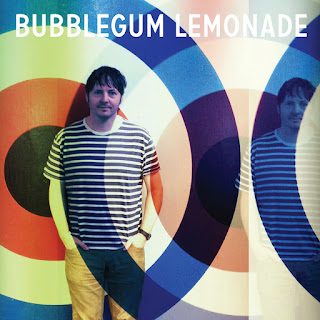 Lawrence "Laz" McCluskey is but one man, but that one man has made a lot of guitar pop fans very happy today.  The reason, of course, is the release of The Great Leap Backward, the latest album from his solo project Bubblegum Lemonade.  Laz's head is hard wired with the sounds of '60s bubblegum pop, run through a late '80s British jangle pop generator with an infusion of The Jesus and Mary Chain fuzz, and then polished with a slight bit of surf pop.  The melodies are memorable and irresistibly bouncy, the hooks are sharp and abundant, and the  wordplay inspired.  You wouldn't have been surprised to find any number of these tracks in top 40 play back in the day of AM radio.  Don't believe me? Press play for "Tongue Tied" below.  If it does for you what it does for us, play the sampler below.  Or just do the right thing and buy the album.