Thirty Pounds of Bone - The Taxidermist 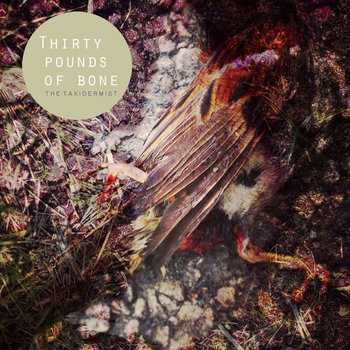 The Taxidermist is the fourth album from Thirty Pounds of Bone, the performing name assumed by multi-instrumentalist Johny Lamb.  Lamb's reputation is built on his version of melancholy folk.  But for this outing the man broadens his scope in chamber pop, soft-focus psychedelic and even shoegaze, directions.  Several tracks boast distorted guitar and layered waves of sound, and there is a gauzy filter to the production.  Moreover, his thematic focus on life, love and death seems to come from a less melancholy place.  I don't know whether Lamb is newly happy, or whether he just has decided to express his sentiments more directly.  In either case, he has crafted and album that is bursting with feeling and life, and written very appealing songs to carry his message.

Lamb was born in Scotland's Shetland Islands, but now resided in Cornwall, where he recorded The Taxidermist.  Remarkably, Lamb played all of the instruments and provided all of the vocals. The album is out now via Scottish label Armellodie Records on vinyl and as a digital download, and you can stream and buy it at the Bandcamp link below.  An example of the more shoegaze/dreampop approach are "Before I'm Done", "All Your Sons", and "Expelled".  "Two Birds in the Brine" and "Your Walk" are more representative of Lamb's acoustic folky side.  If you already are a fan of Thirty Pounds of Bone you probably need no further encouragement to investigate this release.  If this artist is new to you, I think yo will find this to be his most accessible work to date, and well worth your time.