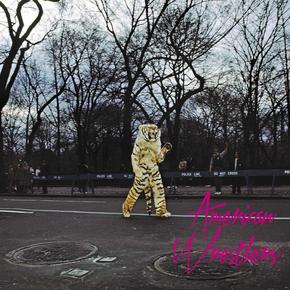 American Wrestlers is mid-30s Scotland native and Missouri resident Gary McClure.  Formerly, he was a member of Working for a Nuclear Free City, as well as releasing an album under his own name.  He moved to the United States a few years ago, and while working a day job, he has been writing music and recording at home with analog equipment.  His approach to marketing has been to send out tracks under the name American Wrestlers, with little or no background information.  The songs obviously have connected with many recipients, and while the mysterious source may have contributed, I am of the opinion that the songs have earned him the attention he now is getting.

With McClure playing all the instruments (including pushing the button on the drum machine), he has prepared an eight-song American debut LP for Fat Possum.  Steadfastly lo-fi and with a bit of a psychedelic swirl, it is, to my ears, timeless guitar pop.  Guitar pop crafted to please the ears with melody and sound, and please the mind with carefully thought-out lyrics.  It seems to me that it is the kind of music that a gifted musician makes when he is writing and recording to please himself, with at most a hope that anyone else will want to listen.  But McClure has also said that he understands that once the song is recorded and pressed in vinyl, it is immutable.  So he takes great care in the process.

The songs are warm, if not always thematically easy, and what McClure's recording process yields in terms of fidelity it gives back in terms of immediacy and accessibility.  The songs aren't just set out there for you to purchase, they are shared with you.  For me, the standout tracks are "There's No One Crying Over Me Either", "I Can Do No Wrong", "The Rest of You", "Kelly" (a beautiful song about a tough subject), and "Cheapshot".  Yes, I know that that is over half the songs, but this album has gotten a bit under my skin, and it feels pretty good there.  We hope Mr. McClure keeps at it, because we want to hear what he has to say.

In the interest of full disclosure, I note that I am an American, and I was a wrestler in high school.


American Wrestlers is available on vinyl, CD, cassette and as a digital download.