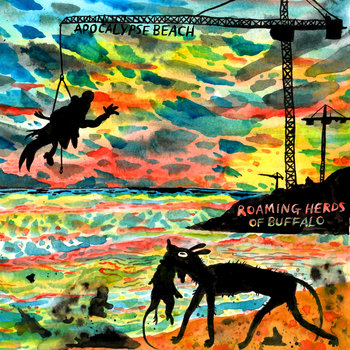 Increasingly there is discussion about how to return the U. S. of A. to its past glory.  And from time to time there is focus on iconic symbols that may have lost their special place in the hearts of its citizens -- symbols such as the bald eagle, the Washington Monument, and the stars and stripes.  The executive committee of the editorial board of WYMA strives to help, so we have considered what other symbols should to be returned to the consciousness of the Nation.  After careful consideration and a couple of cases of the finest domestic fortified wine, we have decided that we need to bring back roaming herds of buffalo.  In the 19th century they were a sign of the America's bounty, her brawny, outdoorsy lifestyle with the freedom to roam without boundaries.  In devising this recommendation we had to ignore several realities, such as the fact that our lifestyles are much less outdoorsy, that herds of large wild animals aren't compatible with urban life, and that it is our own damn fault that we don't have herds of buffalo because we shot them.  But dreamers don't let things like that stop them, and we are dreamy.  So we found a solution.

Yes, we bring to you Seattle's Roaming Herds of Buffalo.  Playing crunchy indie rock, with a few country and surf accents, the band was formed in 2011.  Their third LP, Apocalypse Beach, was self-released last month, and offers ten tracks mostly recorded in a single take to capture the feel of a live show.  This is an album that quite simply makes you feel good -- like you would feel if you just saw a herd of buffalo run alongside your air conditioned gas-guzzling pick up as you sped down the highway to get to the mall.  The musicianship and vocals are excellent, the performances sincere and the songs varied, from the crunchy "Antelope" to the surfy "Summer" to the acoustic-turns-frenetic beach jam of the title track (Beach Boys on drugs alert!) to the dusty California country rock of the showcase track "Cereal Prize".  Check out some songs below and stream the entire album at the Bandcamp link.  "Rewind" begins with the line 'I want beer', and became an instant favorite around here.  The digital album is only $7.  I will also note that the great album are is the work of Darin Shuler.

Make this country strong again, support the return of the buffalo, get Apocalypse Beach.