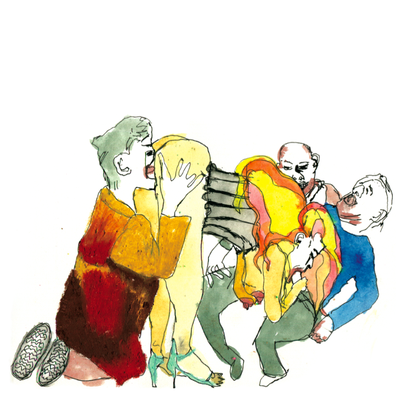 9 Classic Tracks by Sarah Mary Chadwick is music that is emotionally raw, guileless, devastatingly  clear-eyed and devoid of sentimental optimism, stately of pace, and utterly beautiful and captivating.  The keys, drum machines and occasional guitar remain in the background, as they should.  Because however appealing the listener finds the melodies, the star of the show is Chadwick's voice -- clear of tone, with a natural ache and an almost unnerving directness and intimacy.  And that style perfectly matches the material at hand.  Consider them love songs, perhaps, but bleak and sad love songs performed at a codeine-induced pace.  Chadwick has written that all of the songs are about specific times and people, in which case some people may owe other people some apologies (or, at the least, explanations).  Of course, Chadwick will assume that neither will be forthcoming.

With the church-like background of warm synths, the songs unspool like words from the confessional captured by a hidden microphone.  But the unfiltered stories never feel awkward, because the songwriting is so very good, the phrasing so straightforward and willing, that even the visceral sadness takes on a sensual beauty.  This tear-streaked gem is highly recommended for your late-night listening.

A New Zealand native, Chadwick currently is based in Melbourne.  She formerly fronted the dark-themed guitar band Batrider, but 9 Classic Tracks is her second solo album.  9 Classic Tracks is out now on Melbourne label Rice Is Nice, and actually has 11 songs.  The album art presented above is from the artist's own watercolor.  I'm advised that iTunes and Spotify have replaced it with the less NSFW back cover.