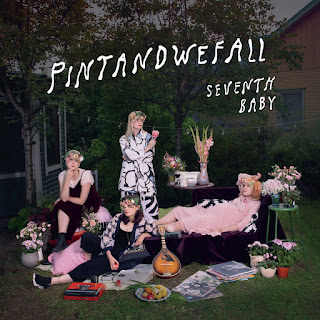 Pintandwefall may have been chosen as a frivolous name. If so, it isn't surprising as the project was formed by musicians with other established projects, and this one may have been a bit of an experiment. But with six previous albums as well as EPs and videos, this Finnish band has proved to be both serious and seriously good. Their latest creation is the just released Seventh Baby. Begun via the exchange of demos after the beginning of pandemic-induced isolation, the album has been enriched by the the contributions of multiple songwriters enhancing each other's contributions. The result is a shoegazey guitar pop with wit, sensitivity, hooks, and plenty of muscle. An album this good deserves to be heard by many people. Buy it and play it for friends. Add the songs to playlists. Mention it in random conversations. Will it work? We don't know. But if you do it we won't feel so alone doing it.