REVIEW: Jimbo Mathus and the Tri-State Coalition - Dark Night of the Soul 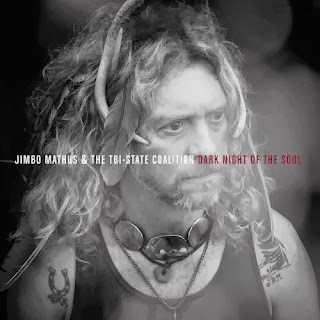 Jimbo Mathus is a veteran of a number of musical styles (The Squirrel Nut Zippers' swing and The North Mississippi All-Stars' blues, to name two), but judging by the contents of Dark Night of the Soul, all of that was prelude to this. And this is, by any measure, a great American Southern rock album. I hear echoes of The Band, Crazy Horse, The Allman Brothers and Leon Russell, but that is by no means an exhaustive list of influences and cohorts for this album, which is, frankly, a bit of a masterpiece.

In addition to his band The Tri-State Coalition, Mathus is joined here by Eric “Roscoe” Ambel of the Del-Lords (and any number of great country rock albums - The Bottle Rockets' Brooklyn Side and Cheri Knight's The Knitter, to name only two) and Drive By Trucker Matt Patton. The band is terrific, and as great as the guitars - lead guitars on the uptempo rock tracks and pedal steel on the country rock stuff - are, it's Mathus' singing that is front and center. And that's as it should be, because he is equally comfortable with soul shouting on tracks like "White Angel", country crooning on "Shine Like a Diamond" and full-on roaring as on "Burn the Ships" and "Fire In the Canebrake". Here's a video of the latter - more laid-back than the album version, but you can hear Mathus' terrific vocal:

Here's "White Angel" - a perfect example of the expansive nature of the music on Dark Night, and probably overall the best track on the album:

The album was made in Mississippi at Dial Back Sound, owned by Fat Possum’s Bruce Watson. Watson and Mathus apparently pared down 40 songs to the 12 that made this album, and are to be applauded, based on the 12 that appear on Dark Night. Sequencing, production, it's all done extremely well. Every song on the album is terrific - "Casey Caught the Cannonball" swings, "Hawkeye Jordan" rocks, and "Medicine" is an old-style blues along the lines of, say, Howlin' Wolf's "Goin' Down Slow". Really, this is just a great rock album. Call it Americana - in the sense that it encompasses a lot of American musical styles (blues, country, soul, rock), that description probably fits as well as anything. But, above all, be sure to call it rock when you tell people about it, because above all, that's what it does. The album is out now (released Feb. 18) on Fat Possum/Big Legal Mess Records.

Okay. I am stopping at the record store on the way home today!