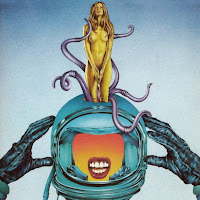 Stockholm's Les Big Byrd is a guitar rock band with a big, sprawling sound -- they've released a video for "Back to Bagarmossen", one of the tracks on their forthcoming EP:

It's a great, expansive psychedelic track that bears the imprint of their producer, Brian Jonestown Massacre's Anton Newcombe. The EP is available via PNKSLM Records - you can pre-order limited edition vinyl now, and it'll be out next week (Feb. 20).