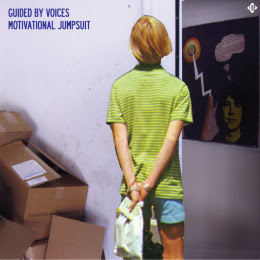 Since Guided by Voices reunited the "Classic Lineup" in 2011, they've released five albums. And they've all been very good to great, a trend that continues on Motivational Jumpsuit, the latest one. Right off the bat, there's a statement of purpose that is about as up-front as any of Robert Pollard's lyrics have ever been:

Because if the majors aren't ready, willing or (more to the point) able to appreciate your awesome stuff, why deprive those of us in the Texas League of those knee-buckling curves and teeth-rattling brushback pitches? An ace is an ace, after all.

In a way, this album is a celebration of everything that's ever been great about GbV: short, catchy songs, a variety of ragged, glorious guitar riffs and an overdose of melody. "Planet Score" is a collection of big-time guitar riffs with Pollard's shouted British accent vocals:


Guided by Voices — "Planet Score" from Guided By Voices

"Vote For Me Dummy" could fit in with the best stuff on Bee Thousand and Alien Lanes, but there are also tracks here that bear the imprint of Big Rock Bob from the "hi-fi" era: album closer "Alex and the Omegas", with its glossy guitars and fully loaded vocals, would fit in on Do the Collapse or Isolation Drills. Speaking of those albums, by the way, it's not like Bob didn't give the major leagues a chance to appreciate his devastating collection of out pitches, is it?

Also continuing a recent trend, there are five creamy, delightful, psychedelic contributions from Tobin Sprout, whose facility with vocal harmony has never been better than it is on "Some Things Are Big and Some Things Are Small". That one builds to an almost unbearably sweet crescendo of multi-tracked Sprout vocals, whereas "Jupiter Spin" is a bit more guitar-based.

With 20 tracks, song lengths that vary from 1:12 to 3:03, it doesn't take long to get into this album. As always, the band makes big melodies but doesn't need to linger... somehow, throughout Pollard's career, it has been a truism that his 1:30 or 2:00 packs more hooks and melodies than most artists can cram into 3:30, and Motivational Jumpsuit is no exception. It's out this week (Feb. 18) and available via GBV Digital and Rockathon.