We admit that three of the contributors to When You Motor Away are burdened with law degrees, and two of us are still practicing (one has escaped).  Nevertheless, we assure you that our decision to review the recent full-length album from The District Attorneys is not due to professional courtesy.  The fact is, Slowburner is a damn fine album, and--as a debut--a remarkably mature and consistent album.  OK, you say, what does it sound like?  To my ears, the instrumentation reflects a measure of west coast jangly indie rock and an equal measure of crunchy southern guitar.  Similarly, the vocals include lots of sunny harmony, but a good dose of soul as well.  And there are plenty of hooks and a layer of grit.  It all works together because the songcraft and delivery are so good.

The District Attorneys are Drew Beskin, Chris Wilson, Frank Keith IV, T.J. Mimbs, and Walker Beard, five guys from Atlanta and Athens, Georgia, who formed the band in 2009.  They claim a wide variety of influences, including The Replacements, Beach Boys, Modest Mouse, Rilo Kiley and Fleetwood Mac.  I think it is a tribute to their talent that I only hear some elements of those influences; these guys are carving their own path.

I suppose after allowing me to babble about the band, I should reward you with a song.  So here is the first single from Slowburner,  "Confusion of Trust" --

And here is a live version of the excellent "California Fire" --


Slowburner was released on April 24 by the This Is American Music collective.  And I can't think of a more appropriately named label for the sound of this band.  Our Portland contributor, Jim Desmond, spent several days in Atlanta recently.  Being a diligent music journalist (and probably looking to submit an expense report to WYMA headquarters), he asked folks who the best young band down there is.  He reports that 75 percent replied The District Attorneys.  These people know something, and now we know it, too. 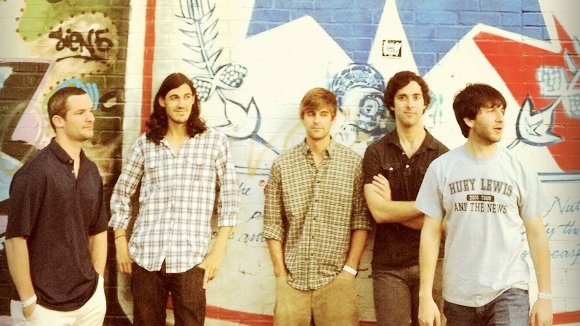 Not only is the album great, but the band is tight onstage and deliver a stellar live show

Don't all four of you goofballs have law degrees?

Great find, by the way.

Just me, Hardy and Jim.