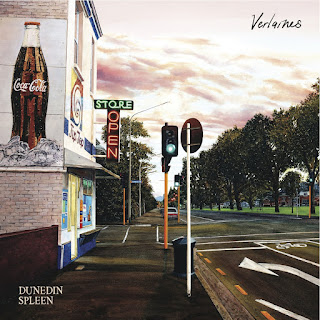 As you would expect, the guy who writes a music blog frequently adds and deletes albums from the playlists on his computer and phone.  But there are several albums that are always available to me at home and elsewhere  Two of them are Hallelujah All the Way Home and Juvenillia, two mid-'80s records by New Zealand band The Verlaines, and a third is the Dunedin Double compilation which included a few songs by that band.  It was vital music for me then, and it still speaks to me.  But I also am aware that The Verlaines frontman Graeme Downes, who is a professor in the School of Performing Arts at the University of Otago in Dunedin, New Zealand, has kept the project alive all the intervening years, and recently released the band's tenth LP, Dunedin Spleen.  And in case anyone was wondering, the album proves that the band is no nostalgia act. The Verlaines of 2019 remain as vital and focused as ever.  As a songwriter and performer Dowes has a broad range, encompassing acerbic social/political commentary as well as softer musings, expressed in poetic lyrics.  The arrangements are varied and textured with melody always a primary consideration.  And with 19 tracks of well-crafted songs, it is a generous record as well.  The Verlaines aren't definably punk rock, indie rock or art rock, but Dunedin Spleen embodies the spirit of all three in the best way possible.

For Dunedin Spleen The Verlaines are Graeme Downes, Stephen Small, Darren Stedman, Rob Burns,and Tom Healy. Libby Hamilton and Shayne Carter provided some background vocals.  The album is out now as a digital release -- see the Bandcamp link below.