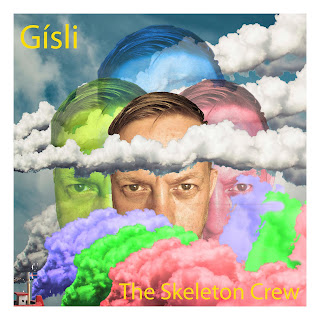 We had a publication schedule for the weekend, and The Skeleton Crew wasn't on it.  But we gave the album a spin last night after discovering it in our Thursday mail.  One listen and our schedule was rearranged to give some time for this charming release.  The album is a new solo effort by Gísli Kjaran Kristjánsson, who records under the simple Gisli.  Gisli's career has taken him from Iceland to Norway, Los Angeles and London, and now back to Iceland, and has included performing with a band, producing and writing for other artists, collaboration with Norway's William Hut, and solo work -- although his last solo album was 15 years ago.

The Skeleton Crew consists of eight tracks, divided between rousing rockers like "Tidal Wave", "Your Personal Hell", and "Out Of Control", and Americana-shaded "Sweet Surrender" and "Mechanical Birds On The Wire".  Each song seems perfectly formed and reflects the artist's complete comfort in expressing himself musically in any style.  The lyrics are high in the mix and are worth your attention.  We loved the album at first listen, but we like it even better with each repeated play (and I think we are up to five this morning already).

By the way, the title reflects Gisli's decision to handle nearly all instruments, programming and vocals himself, with a bit of violin and backing vocals from partner Eliza Newman and some spontaneous percussion by their five year old daughter Salka.

This gem of an album is out today, look for it at your preferred digital outlet.