Monnone Alone - Do It Twice 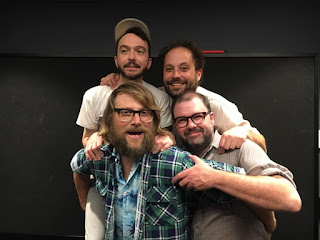 One of the best, upbeat and straightforward rock and roll songs we've heard lately is "Do It Twice".  We wouldn't have been surprised to find it on a long lost album by a criminally overlooked California band, but in fact it is the title track of a two song single by Australian band Monnone Alone.  The other track is the lower key but delightful "The Sea and the City".  In case you are wondering, the "Monnone" of Monnone Alone is Mark Monnone, of Aussie legends The Lucksmiths.  Mark has been carving out a deservedly well-regarded solo career, of which this is an excellent example.  The songcraft and performances are excellent and we commend it to any fan of guitar pop.

Sadly, we must report that Mark has engaged in false advertising.  In addition to Mark providing vocals and guitar, Monnone Alone includes Gus Franklin (drums/backing vocals), Joe Foley (bass/backing vocals), and Louis Richter (12-string guitar).  So, Monnone is not really alone after all.

Note that the links below allow you to obtain the single from the source local to you, with choices in the US, Australia, Spain, and Finland.