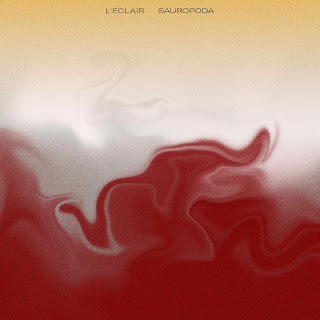 Sauropoda boast deep grooves, multi-layered atmospherics, and an appealing playfulness.  It most likely sounds like nothing else you are listening to, but we strongly urge you to regard its distinctive nature as a feature, not a bug.  The music audaciously melds funk, dance grooves and chillwave electronica into a late-night summer soundtrack. Cue it up, wiggle your hips, move your feet, and let that smile show itself to your world.  This little delight -- five tracks in under 38 minutes -- is the creation of Geneva, Switzerland's L'Eclair.  Frankly, we knew nothing about this band until a few days ago, but they now are on the list elegantly titled "listen to anything they send us from these guys".  And since the Sauropoda was largely recorded live with few overdubs, you can treat it as your own private concert from the band.