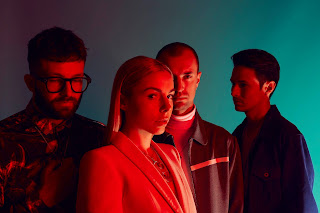 London-based four-piece HÆLOS create music that combines the euphoria of dance with the dark side of electro pop.  Their sophomore album Any Random Kindness is due in the late spring, but they have already been thrilling fans with releases of singles taken from the record.  Here are two videos of singles that demonstrate the band's talent.

HÆLOS are Lotti Benardout, Arthur Delaney, Dom Goldsmith, and Daniel Vildosola.  The band is touring in Europe and North America from the third week of February to the first week of June.  Dates and venues are listed at the bottom of this post.