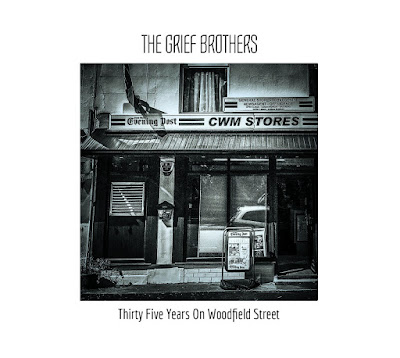 We know we are going to hear good music when the guy who takes the time to send us an album, and tells us that it is wonderful, is the boss of a label other than the label that is releasing the album. Such was out introduction to Thirty Five Years On Woodfield Street by Swansea, Wales outfit The Grief Brothers. We could tell you that it is a the masterpiece. In fact, it is a masterpiece, but that is getting ahead of ourselves.

Where were we? Oh yes, we were sent the album by Wally at The Beautiful Music label.  We trust Wally, so we cued it up.  The first track, "A Lost Week In Bingoland",  began with the protagonist noticing a women in a bar, and described her thusly: "she was swaying on a bar stool, humming songs in the key of grim". In Yoda-speak, 'hooked we were'. And the hook stayed in. The album spans indie rock, folk, and a dash of country while spinning yarns of romance, failed romance, twisted families, old flames and weird scenes. In the main, the songs are nostalgic and warm, with more than a dash of humor. But they don't shy away from grittier themes and when they bite, they leave a mark.

It would break our rules to stream too many of the songs below, and even if it didn't have such rules we would want to leave you needing to head to Bandcamp for the full meal. So you get three of our favorites below, with our admonishment to not miss "The Loser's Hall of Fame", "A Confessional", "A Small Town Gone to Hell", "Scurvy Dogs of Llansawel", "Still Waiting For True Love's First Kiss" ... you get the point - don't miss any of them. For us, this is a top ten album of 2019.

The Grief Brothers are Steve, Ray, Norm, Mark, Jack and Pete, with some additional help from Jon Langford of The Mekons and Guto Dafis (Welsh melodeon player). Thirty Five Years On Woodfield Street is out now via Northport, UK's Country Mile Records.

Thanks very much for your support !