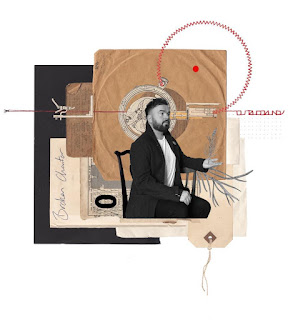 We have been fans of David MacGregor since we first became aware of his performances and songwriting as a frontman for Kid Canaveral.  During some recent down-time for that project, David began work on his debut solo album as Broken Chanter.  The self-titled record arrives today, and we are pleased to report that it bears testimony to all of David's strengths.  The songs are superbly crafted, with strong melodies and sparkling production.  As readers familiar with David's style would expect, the songs are heartfelt -- and heart on the sleeve. But the added dimension, at least to our ears, is the broad scope of the arrangements.  This music doesn't want to be contained by four walls. Rather it invokes the Scottish Highlands and the coasts of Scotland and Ireland.  There really is no substitute for music that makes you feel better about being alive, and this music does just that.

We previously shared "Should We Be Dancing?" and "Wholesale", so we have chosen a few other dandies to give you a sense of the album.  But if you are a fan of MacGregor, you should already be purchasing Broken Chanter. If you are not yet a fan, we recommend trying a few of of these songs or, better yet, listen at your favorite streaming site.

Broken Chanter is out today via Olive Grove Records and Last Night From Glasgow.