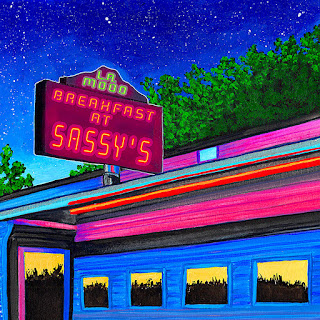 Someone has some explaining to do. Despite us writing about the wonderful Courtney Barnett from time to time, and despite writing about some of the fine releases from Melbourne's Hotel Motel Records, when Dave Mudie, who is Courtney's drummer, releases a record via Hotel Motel -- even under the assumed name L.A. Mood -- no one bothers to tell us (moreover, it is his second EP). Yes, some people decided to ignore our exclusive* readership of over 3,000,254 persons**, leaving us to find the album on our own.
___________
Notes:
*Claim of exclusivity of our readership is based on the same methodology used by Donald Trump to claim the attendance at his inauguration. If it is good enough for The Donald ...
**The 3,000,254 number of readers is not yet audited as our accountant is busy with his other job. After all, those pizzas won't deliver themselves.
____________

However, despite our disappoint, hurt, and a few tears, we are professionals and will bring Breakfast At Sassy's to our readers' ears.  And we'd be fools not to, because this EP is really excellent stuff. The vibe is '90s/'00s rock that sounds like it was cooked in a garage with a touch of blues on the side, and we have it cycling through our sound system on permanent repeat today.  It is a digital release costing five Australian dollars, and if you get it right now you'll have if for the weekend. Trust us, you want it for the weekend. You probably even need it for the weekend.