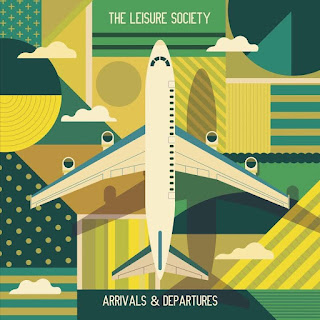 Generous in spirit (and its nearly one hour run time), emotionally resonant, and superbly crafted, Arrivals & Departures is an album that you could spend your weekend playing over and over and not regret a moment.  The creation of UK chamber pop band The Leisure Society, it is delightfully detailed and and varied.  The album has 16 tracks, each consisting of six songs, and the vinyl version is recorded on two discs - Arrivals, and Departures.  Both sets are packed with excellent songs and intriguing musical moments, although to our ears the second disc is more expansive (although not happier) and has earned a few more listens around headquarters.  Oh, we should also mention that the album also chronicles the breakup of the romantic partnership of two members of the band, which is relevant to the listener as it explains the emotional heft of several tracks.  Four years in the making by a talented band, this is a highly recommended release.

Arrivals and Departures is out now in digital, vinyl and CD formats via Ego Drain