Melby - None of This Makes Me Worry 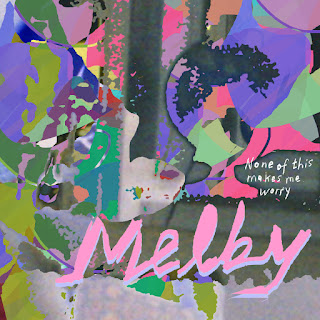 In their approximately three-year existence Sweden-based Melby has emerged as an undeniable guitar pop talent.  On their debut full length album, the just released None of This Makes Me Worry, the band eschews choosing a narrow channel for their art, instead offering indie pop, psychedelia, jangle pop, and various other sub-genres.  And when you do everything as well as they do, there is no need to choose.  While admitting that we are most taken but the uptempo songs, every track on the album has charm, and none of them are skipped when we listen.  Matilda's vocals are near magical and the arrangements and performances are smart and dynamic.  A pleasure awaits you ...

Melby are Matilda Wiezell, Are Engen Steinsholm, David Jehrlander, and Teo Jernkvist.  None of This Makes Me Worry is out today in vinyl and digital formats via Rama Lama Records.