REVIEW: The Pharmacy - Stoned And Alone 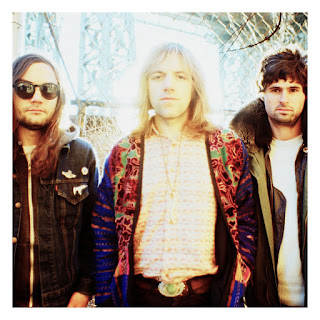 This record is a blast - a Kinks-inspired blast of super catchy power pop with a fuzzy guitar edge. The Pharmacy is Scottie Yoder on vocals and guitar, drummer Brendhan Bowers, and keyboardist Stefan Rubicz. They hail from Seattle, so the grunge/garage bona fides are real. But they've spent a good bit of their recent history in New Orleans, which may be the source of the soulful touches on many of these songs ("Top Of The Ivory Stairs", for one) and the general party-rock atmosphere at work on Stoned And Alone.

Here's a new video for "Dig Your Grave":

THE PHARMACY - DIG YOUR GRAVE (MUSIC VIDEO) from brendhan bowers on Vimeo.

This record features those earlier songs plus several more - at 13 songs, it's definitely a good use of your time and money, even if you already got some of the earlier stuff. And they offer a download of "Baby Be", one of the catchiest tunes on the record.

It's very upbeat, as opposed to the ambling "Lazy Bones" which has a real easy pace and some laid-back guitar and keyboard riffs, and the slow/fast/slow/fast "Where Do You Run To?". The variety in tempo adds to the appeal, as does Rubicz's uniformly excellent keyboard work. Yoder's a very good rock vocalist, and Bowers does a great job keeping the pace and driving things along on rockers like "Pines".

It's on Old Flame Records in the US and Seayou Records in Europe - either way, it's terrific.