This week's edition features two unsigned bands. But do not read "unsigned" as "just OK bands". Both bands are very good, and should have a good future. Trust me, I've been sent albums from recognized labels in recent months that are nowhere as good as the music from Dolfinz and Maydays.

First challenge is how to describe Dolfinz an unsigned band from Stonehaven, Scotland. My best effort is that they live in the garage band neighborhood, somewhat close to the border with the grunge neighborhood, and taking lo-fi transportation to work. However, I emphasize that Dolfinz are not just another garage band. Their songs are catchy; their guitars delightfully hooky. And as indicated by the name of the band and the titles of some of the songs, the boys eschew the over-seriousness that infects many young bands.

I would not be surprised to see this band's star rise rapidly, and you can get in on the ground floor by downloading any or all of six tracks at the Soundcloud link below. Apparently, among the lads' fine qualities is a useful generosity! 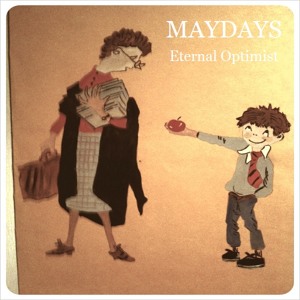 Maydays originate from Caithness in far northeastern Scotland, but apparently now reside in the Edinburgh area. The band has endured some lineup changes, but now consists of Joe (vocals), Swannie (guitar), Kev (guitar), Tittles (organ), Calvin (bass), and Darren (drums). Their music is well crafted indie pop. But you don't have to trust my opinion, you can listen to, and download, three songs below.