The Crayon Fields - All The Pleasures Of The World (Reissue) 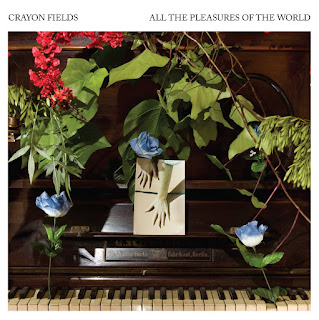 If you are a fan of perfectly detailed, unabashed indie pop with baroque leanings, we have a deal for you. One of the finest albums in that channel in this millennium so far was All The Pleasures Of The World, by Melbourne band The Crayon Fields. Crafted by four friends who had formed the band a few years earlier while still in high school, it achieved an almost impossible level of quality and consistency. The album was acclaimed in Australia and internationally, and the vinyl version has long been impossible to find. Eleven years later, the label has wisely decided that the world will benefit from a fresh edition of the album, with a few added covers and rarities to sweeten the deal. This is an album that never fails to put smiles on our faces and give us a springtime bounce in our step, even in the dead of winter. That kind of magic should be cherished.

The Crayon Fields are Geoffrey O'Connor, Neil Erenstrom, Brett Hudson, and Chris Hung. The reissue of All The Pleasures Of The World is out now in digital, vinyl and CD formats via Melbourne's Chapter Music.