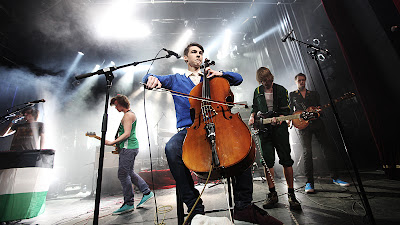 A group of fresh-faced Norwegian teenagers who hew closer in sound to Fear than The Hives (not to impugn the Hives a bit), Honningbarna (Honey Children, in English) are making a tremendously promising splash. Check out their "title track":

They're currently preparing to tour Ireland and UK, and still working to complete an album which will apparently be released by EMI in the Spring. If you're in Ireland or the UK and wondering if you might want to see them, check this out:

And here's a video for "KLART BLIKK", made by 5th graders from Ve and Hånes elementary schools during an animation work shop at Kristiansand International Children's Film Festival 2011.

We hope to have more to share with you soon. They've nailed the old-school punk sound and between the buzzsaw guitars and shouted vocal harmonies - and the exclamation point provided by the unexpected cello front and center - it's both bracing and enjoyable.