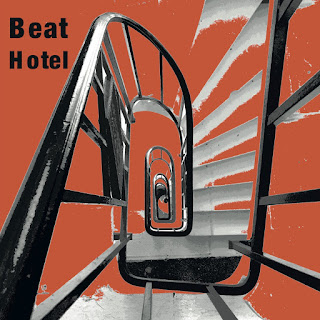 We apologize to our millions of readers for disappearing for over a week, but there was snow in Canada that needed to be skied, and beer and champagne that needed to be drunk. Tough jobs, to be sure, but we believe we performed them ably. So it is back to writing about music worth listening to.

And speaking of 'worth listening to', we suggest that you turn your ears to the self-named mini album from Beat Hotel. If the music reminds you a bit of UK guitar music of the '80s, such as the Creation Records catalog, well, there is a good reason. According to the origin story, the idea for the band arose between guitarist Paul Pascoe (of Mulow, Fire Eyes and others) and bassist Arash Torabi (of The June Brides, The Distractions, and The Granite Shore) at a show by The Jasmine Minks. After an extended hiatus, the band surfaced again earlier this decade, then joined by drummer Dave Morgan (of The Loft, The Weather Prophets, Primal Scream, The Jazz Butcher, Subway Sect and others -- an essential man for many of our essential bands). For Beat Hotel the band is completed by guitarist Stephen Brett. Additional support was provided by Frank Sweeney and James Thomas.

Whether grooving to the power pop of "Feel It", the jangling psychedelia of "Bury It Deep", the ballad "Beat Girl", the country rock of "Daddy, I Drown", the hard-rocking roadhouse "Low slung Loser", or the burning closer "Heat Light Fire", the astute listener knows their ears are in the care of absolute professionals. We love this album. It fueled our recent vacation and we aren't going to put it on the shelf for a long time (in fact, we are listening to "Beat Girl right now -- what a fine song!

Technically, the release date isn't for another month, but you can stream it right now at the Bandcamp link below. If so-moved, you can own it in digital or vinyl form. The record is released via Occultation Records.