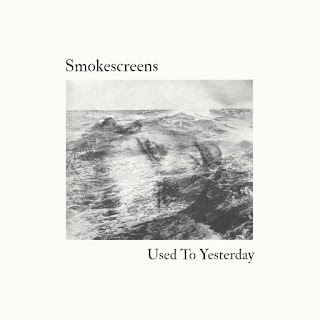 On their second album, the newly released Used to Yesterday, Smokescreens doesn't try to disguise their influences.  But when your influences are early Flying Nun bands, '80s British guitar pop, and California guitar pop from the '60s forward, why the hell would anyone want it hidden?  And by the way, in the unlikely event that the band compiled the album as an audition to be a When You Motor Away house band -- and who wouldn't want to do that -- they passed the audition with top marks.

The joyous sounds kick off with the buzzsaw guitars of "Someone New", reminding us of member Corey Cunningham's former project, Terry Malts.  And then, it gets even better, with the glorious jangle of the title track followed by "The Lost Song", which could have been 'lost' off an '80s album by The Wedding Present or The Clean (and either would be happy to claim it, we suspect).  "Jolly Jane" lives up to its name with a happy garage pop vibe.  "Buddy" provides the rare slower tempo with a bit of Kiwi-style melancholy.  The upbeat vibes ramp up again with the next song, the Brydsian "Waiting For The Summer".  '80s New Zealand is further represented by a cover of Wasp Factory's "Steel Blue Skies".  And for us, the final three songs of the album provide the cherry on top, with the set of "Fool Me", "It's Not Right", and "Falling Down" blending the folk rock of The Bats with '60s British Invasion garage pop.

Used to Yesterday offers terrific melodies, great vocals, top songwriting, and all the style boxes ticked we could ask for.  This album may never leave our rotation.

Smokescreens are Chris Rosi, Corey Cunningham, Brice Bradley and Jenny Moffet.  Used to Yesterday is out now via Slumberland Records.