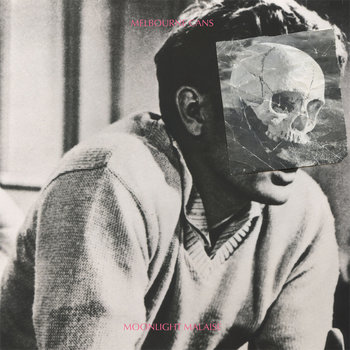 I took a few days off, so I'm coming back with what I believe is a very interesting young band.  Melbourne Cans are an Australian quartet whose most evident influences, at least to my ears, are '80s - '90s New Zealand rock and '50s -'60s girl groups and doo wop.  Add baritone vocals and an evident love for pop and you have a band with a distinctive, if rather unexpected sound.  And the bottom line is that the music is good, and it is entertaining.  The band's 2014 LP is Moonlight Malaise, which originally was a vinyl-only offering via Melbourne's Lost and Lonesome Recording Co. but it now is available as a digital download at the Bandcamp link below.  Packed with ear worms that demand repeated listenings, Moonlight Malaise is one of those overlooked albums that should continue to gather steam as the word gets around

Melbourne Cans are Ian Wallace (guitar/vocals), Will McFarlane (bass), Ash Buscombe (drums), and Nina Renee (vocals/keys), who variously are members of other bands such as Pageants, Shocking Pinks, Pets With Pets, Witch Hats, Ladydreams, and Creeks.