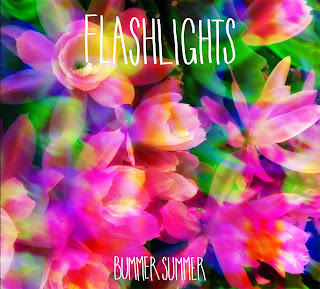 Flashlights are a delightful indie guitar rock band from Brevard County, Florida, playing an uptempo style that is simultaneously nervous and relaxing, fast and slow, quiet and loud... qualities that define the best of the lo-fi indie rock inspired by 90's bands like Sebadoh and Guided by Voices. The band began as a solo acoustic project for 24-year-old singer/guitarist Terry Caudill in 2007, and since has added various members from the local punk scene before settling on their current lineup of Ian Turner-Sanders on guitar, Will Powell on bass and Melissa Hopkins on drums. They call to mind such WYMA favorites as The Henry Clay People and (fellow Floridians) Human Television, what with Caudill's cracking voice, the simple arrangements and the urgently strummed, often jangly electric guitars.

Here's a video they made of "Failure":

It's a great-sounding song about some very sad stuff - heartbreak, a bad relationship gone even worse:

"...Your nails are made
of glass, cutting up my heart into pieces. Talking to myself
when yesterday's repeating. I can't go on like this.

Fall apart just to recollect that I'm a failure.
All the moments I spent with you, what was it all for?
I break my fucking back day after day and that's what hurts.
You got me on my knees."

Here's a video for the second track, a previously-released single, "Don't Take Me Seriously":

And I think the flourish of guitars on "All Cats Are Beautiful" is just terrific - beautiful in itself:

The album was produced by Scott Hutchison and Andy Monaghan of Frightened Rabbit and among the influences they claim are Archers of Loaf, Superchunk and Built to Spill. I hear bits of all those, as well as Frightened Rabbit. It's certainly an interesting intersection of sounds, but you should know that it's much easier on the ears than all that sad-sack lyrical content might suggest. That's not unusual, really, but it seemed worth mentioning. The guitars, especially, have a diaphanous, sort of jewel-like quality to them - something that's prettier the more you listen.

Bummer Summer is out now (June 24th) on Hard Rock Records and they're on tour throughout August and into the fall - dates (as well as a free MP3) available at their website. This is one of the nicest surprises I've had this summer - it came out of nowhere and in an unassuming way just sort of took over my stereo for a while.