NEW SONG: Saint Rich - "Officer" from upcoming Beyond The Drone 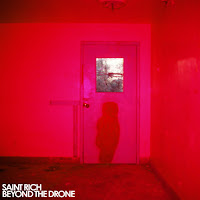 Saint Rich is composed of Delicate Steve bandmates Steve Marion and Christian Peslak. They play a muscular, sort of psychedelic/boogie guitar rock with dense interplay between two leads. They'll have an album Beyond The Drone out in October in the US and Europe.

And here's a preview track to stream - "Officer" - influences are pretty clearly (among other things) 70's Stones and T Rex... that's a very nice acoustic-into-electric break beginning about 2:45 in and building momentum toward some guitar pyrotechnics over the last part of the track. I'm looking forward to hearing more.