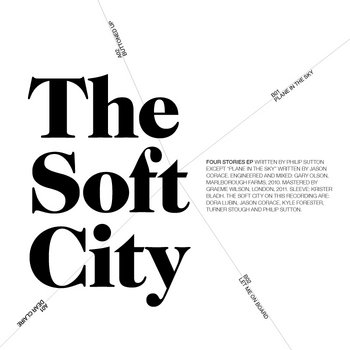 I was impressed enough with Before There Were Pictures, the 2014 LP from Phil Sutton's Pale Lights that I ranked it among my top albums of the year (list here; original review here).  Thanks to the wonders of the internet, we have access to Phil's previous project, The Soft City.  The Bandcamp link below takes you to the 2012 four track Four Stories EP, two tracks of which are presented below.  This is great, jangling folk rock/indie rock stuff.  The digital download for this EP and earlier released linked on the Bandcamp page are name your price, so this should fit your budget while making your heart glad.

I think that the band's lineup changed from time to time, but for this EP The Soft City were Phil Sutton (drums and guitar), Dora Lubin (vocals), Jason Corace (guitars), Turner Stough (bass), and Kyle Forester (keys and guitars).  All songs were written by Sutton except for "Plane in the Sky", which is attributed to Corace.