Friday Nuggets: The Mekons "Empire of the Senseless" 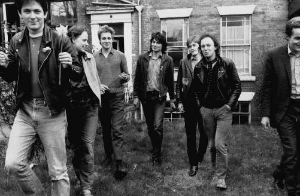 The Mekons are certainly not a garage band in the narrow sense of the term, any more than they are a punk band, alt-country band, Brit rock band or any other label you might try to pin on them.

One of the most respected if criminally underrated bands of all time, The Mekons have been doing their thing since 1976 when they formed in Leeds, England. And they have never followed any rules or formulas. The Mekons were always experimenting, introducing new sounds and instruments, and consistently taking chances and following their own instincts. Few bands have stayed as true to their own ethos. The art school anarchists made up their own rules and managed to outlast their peers that inspired them like the Clash and the Gang of Four.

One of my favorite Mekons songs is "Empire of the Senseless" from their classic 1989 release The Mekons Rock 'n' Roll, which if you've not heard the Mekons before is a fine place to start. I particularly recommend this record to the many Guided by Voices fans who frequent our blog here.

A new documentary film has just been released - "The Revenge of the Mekons".  Read about it here, and see it when it comes to your town. I will be there the first moment it screens here in Portland. Here's a trailer for the film:


REVENGE OF THE MEKONS trailer from Joe Angio on Vimeo.

Okay, we will give you one more song, also from The Mekons Rock 'n' Roll, "Memphis Egypt":

It's never too late to discover the Mekons.

"It's never too late to discover the Mekons."

Wise words! Fear & Whiskey is great. And I have soft spot for Curse of the Mekons. I think Jon Langford's Skull Orchard is a terrific record and a must to check out.

Here's 100% Song from Curse of the Mekons
http://www.youtube.com/watch?v=raxD_J_qoGs

I've been listening to The Mekons since the mid-to-late '80s, when I first heard bits of Fear & Whiskey on John Peel's nightly evening show on the BBC. I still haven't listened to everything they've released (& probably never will), & the ones I have I've heard in the wrong, completely random order... but I find that I prefer them (& that they make just as much "sense") that way.

I'm listening to the remaster of Curse as I type, & it sounds better than ever, especially Tom Greenhalgh's eeriely gorgeous "Lyric", one of my favourite songs in the entire Mekons' canon, I think?

The Mekons are an often magnificent, & always inspiring band. Long may they reign / rain. :)