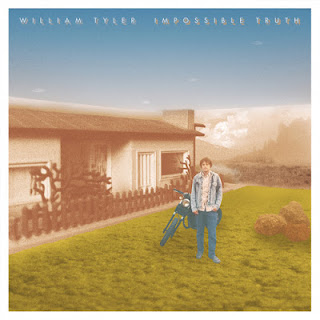 William Tyler is a Nashville guitar player - well, that's not saying much, is it? I mean, didn't John Sebastian say there were thirteen-hundred and fifty-two of them? Let me go a little further - William is an outstanding guitar player and is recognized as such, even in Nashville. He's played with Lambchop, Silver Jews, Candi Staton... and more. He also has a solo album - Impossible Truth - due out in March, and it's full of reasons to understand why Tyler stands tall in Guitar Town.

Here's a track, the 6:34 "Cadillac Desert". It's a bit of a wanderer - meandering between acoustic guitar with feedback to acoustic guitar with washes of pedal steel behind. A bit reminiscent of Richard Buckner's Devotion + Doubt, or going back a little further, the blues-based acoustic work of John Fahey (but with some distortion/feedback plus pedal steel). This is beautiful stuff.