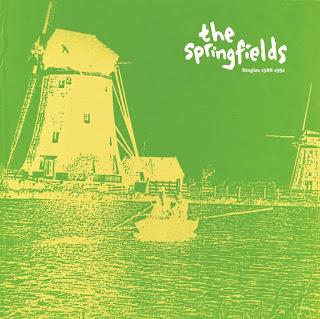 We know that there is a jangle pop god, and we know that this god bestows favors on devotees of the genre. Often those favors are in the form of new recordings by current bands. But occasionally the jangle pop god delivers an extra special treat in the form of long-lost gems resurrected for our pleasure. Today, working through faithful servant Slumberland Records, the jangle pop god reveals Singles 1986 - 1991. The album collects the tunes from all five singles by The Springfields, which were released between 1986 and 1991 on various labels including Sarah Records. The Springfields were just one of the bands that offered the combined talents of Ric Menck and Paul Chastain, but may have been the highest expression of their art. Crafting and covering songs that reflect and project the golden tones of indiepop from the British Invasion through the current decade, Menck and Chastain's five-year run in this band serves to sum up the best of 50-plus years of the genre despite arriving in the middle of the span. Quite simply, you cannot be a jangle pop fan and turn your back on this record. The god has been good to us, accept her gift.

The album is out now in vinyl, CD and digital formats via Slumberland Records.