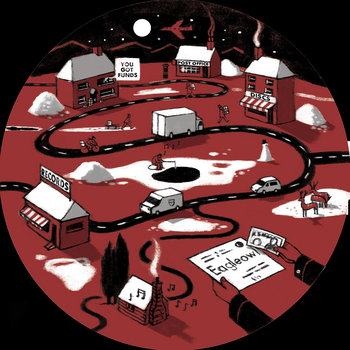 eagleowl is a collective of Scottish indie musicians who are active in other well-regarded bands when not performing as eagleowl.  Bartholomew Owl (guitar/vocals) and Malcolm Benzie (violin/guitar/vocals) formed the band in Edinburgh in '05.  Clarissa Cheong (double bass/vocals) made it a trio for several years.  The current version also includes Rob St. John (organ/harmonium/vocals), Hannah Shepherd (cello) and Owen Williams (drums).  They have just released the two-track "Clean the Night" for the wiaiwya-7777777 singles club.  It is the final single in wiaiwya-7777777's singles series for 2014, and in my opinion they are closing the series with style.  The title track is haunting and atmospheric, with lean instrumentation and female-dominated vocals.  In contrast, the following "Life We Knew is a gentle, up-tempo indie pop tune with a warm vibe that invites -- and rewards -- repeated listens.  This is one of those releases that prove that singles and EPs are wonderful ways to collect music.  You can stream both tracks below, and investigate more at the following links.


By the way, the seven discs in the 2014 singles series have specially drawn art work which, when collected, provide a how-to guide to releasing your own single.  Clever and helpful -- consider it a buyer's rebate of sorts.