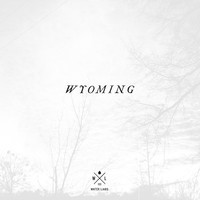 Water Liars is a Mississippi duo, Andrew Bryant and Justin Kinkel-Schuster, whose sophomore LP Wyoming will be out 3/5 on Big Legal Mess/Fat Possum.

"Fake Heat" is the first track off Wyoming, and they've made it available for free download as a preview.

This is recommended if you like well-sung folk rock like Richard Buckner or the recently-featured Joshua James - a good strong, evocative voice over fairly delicate instrumentation. Most bands would be quite satisfied with a initial career stage that resulted in a nomination for a Mercury Prize for their debut album, but most bands aren't going to achieve that kind of success.  London-based Django Django isn't like most bands.  Their self-titled debut album was nominated for a Mercury, after great success in the UK.  Then it was licensed for release in the US and has been enjoying success on this side of the Atlantic.  Then, in an embarrassment of riches, the album earned a coveted spot in my top 50 albums for 2012 (my list here).

What makes Django Django stand out, in addition to the excellent performances, is the distinctive sound.  The tracks marry various degrees of krautrock, post-rock, psychedelia, dance pop and, at times, country western guitars to make an album that is energetic and has a genuine sense of fun.  While the album's core is undeniably percussion and rhythm, the distinctive hooks, frills, effects and melodies hold their own.  And thematically, there is no self-imposed constraint to be conventional.  The boys are on an adventure, and we're along for the ride.  The deadpan vocals might remind you of The Talking Heads or the Beta Band, but the sense of wide scope and wry humor remind me more of the work of the Welsh band Super Furry Animals.

Try out the great sound on "Default", in which you may hear a nod to Bo Diddley's guitar riff.

Django Django has been called a Scottish band because the members met and began playing music while at Edinburgh College of Art.  But they now are based in London and the members -- David Maclean (drummer and producer), Vincent Neff (vocals and guitar), Jimmy Dixon (bass), and Tommy Grace (synths) --  hail from England and Ireland, as well as Scotland.

And here is a favorite of mine, in which the band builds a psychedelic stomp on a timeless rockabilly base --

Today's introduction is to Males, a garage pop/surf band from the fertile Dunedin, New Zealand scene. The band is Richard Ley-Hamilton, Sam Valentine, and Ben Madden.  They released the four-track EP Males Males Males in July 2012.  Although the physical copies are sold out, the tracks are available on Bandcamp for "name your price".  You can stream them here:

You never know where your next recommendation is going to come from, which is why it pays to be open to nearly everything... for instance, who'd have predicted that I would become aware of outrageous garage punk from Mexican/Australian party animals, out now on a French record label (Casbah Records)? And yet, here we are:

There's not a lot to say about this record - good luck understanding, much less analyzing, the lyrics... It's as lo-fi and breakneck as any garage punk you are likely to hear this year, and features distorted guitars, undecipherable Spanish/English lyrics, and also distorted guitars.

In other words, it's fantastic. My favorite tracks are the nearly 4:00 "Los Perros" - a guitar distortion workout of epic proportions, and the 1:55 "Hijo Del Mal" - which reminds me of Johnny Thunders' Heartbreakers played through the amp that fell off the back of Jackie Brenston's Rocket 88.

We are starting a new Friday feature at WYMA: Friday Nuggets, featuring a garage rock classic.  Nuggets of course being the title of the absolute must own Lenny Kaye and Jac Holzman compilation of 60's psychedelia and garage rock.  We will at times be broader than those CDs but in that era and vein.

Many of the new bands that Rocksteady and John in particular feature here at WYMA are direct descendants of this great lineage.

We will lead with one of my all-time favorite songs, a certified classic and prototypical garage rocker, "Psychotic Reaction" by the Count Five, from 1965.

The Count Five were from San Jose, CA. "Psychotic Reaction" was a top 5 single, as big in its day as say a Taylor Swift or Maroon 5 hit today.

If you have ideas for songs you'd like to see in this feature, please feel free to include them in comments.
Posted by Jim Desmond at 1/11/2013 1 comment: 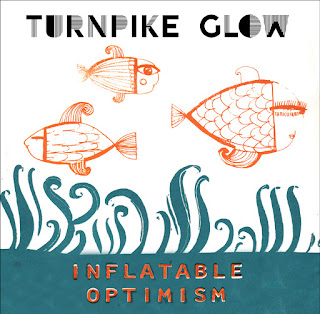 Here's a great new song from The Men

Brooklyn's Sacred Bones Records is announcing that Brooklyn noise polyglots The Men have an album being released on 5 March, and have begun streaming the first single, "Electric", which you are welcome to listen to right here:

The Men have a rugged sound, hard-to-heavy guitars and all the stuff that goes with that, but they're tough to categorize because they do so many different and cool things within that framework . The new album is called New Moon, and will be the band's third with Sacred Bones. My first experience with the band was last year's Open Your Heart, which I liked so much I immediately bought their second one, Leave Home. Buy them, crank them up, and be happy. Go check out the Sacred Bones website and listen to more songs by Men and the label's other bands.


If it is Wednesday, it is a new playlist Reverberation Radio. Something new, something old, and more often than not, something blue.  . The Golliwogs changed their name to Credence Clearwater Revival. Raul Seixas was the father of Brazilian RnR. Mose Allison a major jazz icon and songwriting contributor to the lexicon of modern pop music (Young Man Blues - The Who) throws his spin on Willie Dixon's "Seventh Son." Joe Bataan created salsoul and is the self-monikered "King of Latin Soul."  Something blue is provide by the 60's British Blues Invaders The Pretty Things.  A great soundtrack to start your day. 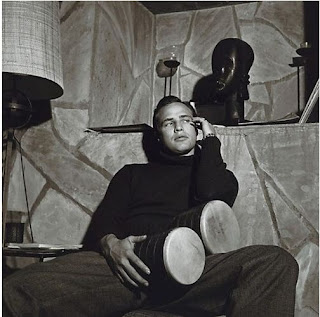 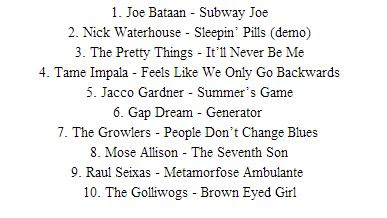 Ragged, weird, fantastic and a bit feral are some of the descriptions applied to Opposite Sex (yes, I understand they also are applied to one's exes of the opposite sex generally, but you don't really expect me to tackle that subject, do you?).  Lucy Hunter (bass, vocals, trumpet, piano, keys), Tim Player (drums, vocals, keys) and Fergus Taylor (guitar) are college students currently residing in Dunedin on New Zealand's south island.  Their self-titled debut LP was recorded in eight hours over two days at the Fishrider Records studio.  Its original release on Fishrider was in 2011 and sold out quickly, probably largely to an eager New Zealand audience.  But Fishrider re-released in 2012 and it was licensed to Occultation for distribution in the UK and Europe, giving the band renewed exposure.  I first heard the album two weeks ago, and after multiple plays concluded that it was in my top group of recommended albums for 2012 (My 2012 list here).

The songs on Opposite Sex vary among somewhat scruffy folk rock, post-punk, alt rock, cabaret pop, and other, somewhat more adventuresome approaches including carnival waltzes.  At times it seems like the trio is performing free form poetry to a lo-fi accompaniment.  The vocals -- mostly Lucy but some from Tim as well -- are unassuming but effective.  Imaginative, twisted pop such is this has an immediate magic, as well as a broader effect in subverting the boundaries of what to expect in a pop song.  By the way, currently four of the tracks on the album are available for free download at the Bandcamp link below, although I recommend the entire album.


"La Rat" by Opposite Sex from Fishrider Records on Vimeo.

"Sea Shanty" by Opposite Sex from Fishrider Records on Vimeo.

Finland's Paperfangs are a three-piece electro-pop band.  Their debut LP, Past Perfect, will be released by Soliti Music in February, but track "Bathe In Glory" has been released as a single.  If this track is representative of the quality on the album, I think it Past Perfect will be one of the early pop gems of the year.

OK you nervous and excited Irish fans. Here's one that will help you get pumped up.
We don't do much hip hop here, but this is worthy.


Macklemore, real name Ben Haggerty, is from Seattle. The track is produced by Macklemore's frequent collaborator Ryan Lewis.
Now I have to go headbutt my Irish Terrier. His name is Renny, but today he's Clashmore Renny.
Posted by Jim Desmond at 1/07/2013 No comments:

This year had as much great music as any year I can remember. A ton of it was loud. Maybe I should have written more about it.

Jason and Beth Kutchma came to Durham from Pennsylvania in the mid-aughts, formed Red Collar, and have been embraced by the rock and roll scene in these parts like only a handful of bands over the past 10 or 20 years. To be sure, there's a ton to like about a straight ahead American rock band finding a voice in a crowded musical space without feeling a need to do cheap, genre-bending stunts. Here's a live video of the album opener, "Orphanage", performed at one of the best places anywhere to see a show -- Durham's Motorco Music Hall.

There was a time, a time when the artisans of metal forged their weapons from the deepest veins beneath the mountains, with concussive rhythms, tribal drums, primordial riffage, nouns like "demiurge", and dwarves and goddesses and such shit as that. My last, misty recollection of such a time was the last time I played this album.