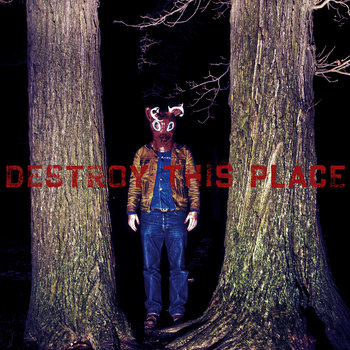 Destroy This Place is a Detroit-based hard rock band playing hot guitar riffs over a breakneck rhythm section. If that sounds to you like the Foo Fighters, I'd say you are onto something. And if you like the Foo Fighters, I wager that you will enjoy Destroy This Place, and their new self-titled album, too. We wrote about them, and shared two songs, back in April (WYMA post here).

To get you started on your speed trip, here's "Graves":

Love the wall of guitars on this one, truly, but as on the rest of this album, I want to call attention to the drummer and bassist - they knock it out of the park, especially on this song. The vocals, and the way they interact with the guitars, remind me a bit of Overwhelming Colorfast. Check out this one, opening track "Lethal Sky":

And one of the tracks we shared previously, "Defeated":

But again, this music ain't happening without the killer drum and bass - try not to throw your head around while you're listening to this. They play hard, fast and loud - but the band is tight. One of the most melodic tracks is the closer, "Ghost Ride The Lightning" - but don't worry, there's plenty of thrash on this one too:

If you need any more hard rock bona fides, the album was recorded by Mike Bridavsky (BLK JKS, Rogue Wave, Good Luck, Murder By Death, Magnolia Electric Co., etc) at Russian Recordings in Bloomington, IN, and mastered in Chicago by Bob Weston (member of Shellac and Mission of Burma, engineer for too many hard rock albums to name). It's a hard-rocking record, and a lot of fun to listen to. Just make sure you're where you can turn it way up.