The Mokkers are an all female garage band from Berlin. They have a five-track EP, The Mokkers out on Holy's Hit Records. Catch the infectious sound on this instrumental--


Actually, all the clips I have are of live performances. But I think that's a good thing when were talking about garage bands.


Here's one in English--

Tom Fool is the solo project of Rick Webster, the vocalist for the recently disbanded Unkle Bob. The songs were written by Webster and Andy Gill of Gang of Four.
The Photograph EP

I know a thing or two about bad band names. In college I played in a band called In My Shrubbery. In high school I played in a ‘metal’ band with such an unintentionally bad name that, even though I had nothing to do with thinking it up, I’m still too embarrassed to divulge it here. Sometimes a band name becomes bad passively, simply through the incessant unfolding of human events. It was thus that my current band’s name, Jerry Sandusky’s Army, suddenly went from totally great to decidedly not great. We are trying to rename the band right now, and I have thrown out the idea of calling it Grim Carnes, as a nod to our death metal cover of “Bette Davis Eyes”, which is a crowd fave. You have to admit that’s a pretty great band name. Yeah, I think so too.

And then there are bands with names that are so randomly, yet cleverly, bad that they are actually awesome. At the top of this list is Gauntlet Hair, from Denver by way of Chicago. In October, this band with the awesomely bad name released an awesomely good self-titled debut. The band records as a twosome – Andy R. on vocals, guitars, bass and keyboards, and Craig Nice on drums and drum effects – and tours as a foursome. Forced to hybridize, I’d call them a cross of Wu Lyf and Abe Vigoda (both cool band names). That comparison might stem mainly from all three bands’ heavy use of delay pedals, creating that beautiful spacey, chiming guitar sound. Check it out on the brand new video for the second track, “Top Bunk”, featuring ze govanatah:

The CD’s liner notes say the album was recorded in Andy’s grandmother’s basement. The acoustics of the production suggest Andy’s grandma lives above an airplane hangar. I mean that in the best way possible. Anyway, there’s really not anything close to a throwaway track on this album. Here’s the official video of the album opener, “Keep Time.” The last break in the song (at around the 3.00 mark of this video – where it looks like the bearded mime or goth hippie is about to get killed) is pretty close to musical brilliance.

As if they needed more of a seal of approval than plaudits from this blog, it’s worth noting that they’re signed to Dead Oceans, which is without question one of the best indie labels out there (Destroyer, Citay, Tallest Man on Earth, many more). And it’s worth noting that Dead Oceans is based in Bloomington, Indiana, the same town that gave us one of the best band names ever, John Wilkes Booze. Is this mere coincidence? If you said yes, consider that the mayor of Bloomington’s last name is “Kruzan”, which has exactly the same number of letters as the name “Oswald”. And Arnold Schwartzenegger, star of the video "Top Bunk", was married to a Kennedy. If that makes you nervous, and it should, you can just chill out and listen to this:

Gauntlet Hair's very own band site which is not all that current (the sign of an in-demand touring band).

Check out all the great bands at Dead Oceans

Get to Know: Radar Eyes

Many years ago I lived in Chicago, but I've spend much of the intervening years ignoring its music scene. I'm being roused from my neglect of late, because it seems that the city of big shoulders has a good indie label or two, and a number of interesting bands. One of those bands is psychedelic/garage outfit Radar Eyes. Radar Eyes consists of Anthony on guitar and vocals, Shelly on drums, Lucas on bass, Nathan on guitar and Russ on guitar and organ. They are releasing an LP on Chicago's HoZac Records early in 2012, but you can get a taste of their sound on this previously released single below. I think you'll understand why I'm expecting the LP to be a Rocksteady74 favorite next year.

Radar Eyes also released a two track 7", Miracle on HoZac Records last month. A site at which you can stream both tracks is here. You won't regret listening.

As regular readers of this blog know, No Future from Wax Idols was one of my favorite albums this year. I you want to catch up on the review, it is here. But the reason for posting is to share this new video for album track "Gold Sneakers"--

The Soul Corner - Ike and Tina Turner, "A Fool in Love" -

One of my all-time favorites, from 1960, "A Fool In Love", Tina Turner's very first record:
Here's a live performance from the Shindig! TV show in 1964, with Tina and the Ikettes dressed uncharacteristically conservatively, no doubt to please the uptight TV network dons:
Posted by Jim Desmond at 12/02/2011 No comments: Links to this post 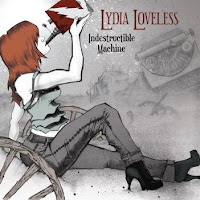 The emphasis is on the "country" and the "indestructible", I think. She's got a huge voice and a ton of talent, and fits squarely in the tradition of great female country rock vocalists like Neko Case and Maria McKee... I don't normally spend a lot of time with lyrics, but holy hell, check this out:

cos my daddy was a preacher but he was a junkie, too /
i grew up on whiskey and God so i’m a little bit confused /
i didn’t know it was so easy to let this world get its hooks into you

And here's an acoustic in-store of her performing "More Like Them", the song that caught my ear on a KEXP Song of the Day podcast:

Folks, she's 21. And the best part, she's hooked up with the great alt country label Bloodshot Records. You can download an MP3 for "Can't Change Me" and check it out for yourself.

Lydia Loveless at Bloodshot Records
Posted by John Hyland at 11/30/2011 No comments: Links to this post

There is a saying in Austin--"keep Austin weird"--and Austin's The Strange Boys do nothing to counter than sentiment. After two promising LPs in 2009 and 2010, The Strange Boys And Girls Club and Be Brave, respectively, the band has released Live Music ("Live" is pronounced like "give", not like "hive") on Rough Trade. While the music remains idiosyncratic, it has settled into an amalgamation of garage, folk, shuffle blues and countrified R&B. While all of that might sound a bit, well, strange, the gang pulls it off quite delightfully. The band sounds tight and the performances seem confident. As I listened to it I was reminded of Mungo Jerry, and that actually is a darn good comparison to have, in my book.

The first single and opening track, "Me and You" --


The Strange Boys have improved with each offering. They've always displayed energy and talent. But more important, on Live Music we hear the sound of a band finding their own voice. The elements are nothing new, but the way this band uses them makes their contribution seem unique and refreshing. Give them a try.

"you take everything for granite when you're stone"

Sad Face is a Seattle band with a bracing sound, reminiscent in places of Mclusky (opener "Death Boy" has that slashing lead guitar-with-punk backbeat) and in others of older-school punk... but they're not content to play in the punk quadrant exclusively. There is a lot of diversity to their sound and, one imagines, their influences and for me, this record holds up really well.

The second song, "To Use Another", is driving guitar rock that's easy to like, as it chugs along at a measured pace, breaking out into a couple of guitar freakouts:

There's plenty of sonic variety and obvious talent, and I expect this record to make my year end Top 20 (there's a hint for you to stay tuned - my list won't be as long as Rocksteady's but hopefully it will help you find some stuff). Here's the album closer, "Sapphire Noise", which has a kind of Eleventh Dream Day vibe going on:

Listen or buy at their Bandcamp site:

I profiled British musician Simon Bish earlier this fall. I'm impressed with the quality of his guitar pop and his dedication in plugging away despite the absence of a commercial breakthough. Simon has a new album, All Aboard With ... Simon Bish, which is released on Simon's own Pop Noise Records. In my view, All Aboard is 11 tracks of excellent jangly indie pop. Here is the album's opening track, "You Ran Away" --

Simon has a special offer for you. If you go to Simon Bish's website, and click on the "free CD" box, there will be a contact box where you can provide your name and address. Simon then will send you a 30-track deluxe version of All Aboard With ... Simon Bish, including the original album, an EP, outtakes, demos and other selected songs. If you like jangly guitar pop, I can't think of a reason not to take this opportunity to become more familiar with Simon's music.

Here are two more tracks to listen to while you fill out the contact form:

Denver popsters Tennis are releasing a new album named Young & Old in February 2012 on the Fat Possum label. The album was produced by Pat Carney of the Black Keys. However, to keep themselves on our radar they are releasing a double A-side 7" on December 6 on the Forest Family label. The lead track is "Origins", which also was produced by Carney.
Origins by tennisinc

To my ears it is less '50s-'60s pop and a bit more indie rock. It will be interesting to hear what the duo gives us on the new album. The other track on the 7" is "Deep In The Woods" and was self-produced.