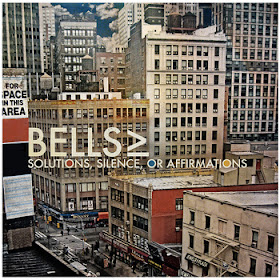 Barocas and Robbins, who have over a 20-year friendship and collaboration in Jawbox and elsewhere, create a lively, muscular base for the music... and the guitars and cello interplay masterfully. This is music that will appeal to fans of instrumental rock of any stripe, especially the stuff that often gets labeled "math rock" or "post rock". It's fiery, but at the same time it exhibits a sort of quiet confidence and patience. On the opening track "Apostatic", as on most of the record, the drums set the pace throughout and create a framework within which the guitars sort of swing back and forth and the cello fills the sound. On "Brothers, Sisters" the cello and guitars at the outset are laid sort of quietly on top of the drums, until both swell up to fill the room about 2:30 in.

Here's "No More Water", which makes good use of the contrast between sound levels and tempos the band plays with:

And here's "Metatron" - which calls to mind, in places, a revved-up Mogwai track:

As you listen, it's clear this is a drummer's band, and the guitars and cello follow Barocas' lead and make one of the strongest records of 2013. It's out now (July 30) and available now via Bandcamp or all the usual outlets... though the band makes the statement that, to get the album they intended, with the interstitial pieces intact, you're best with the vinyl or the Bandcamp download. You can read more about that at their website.