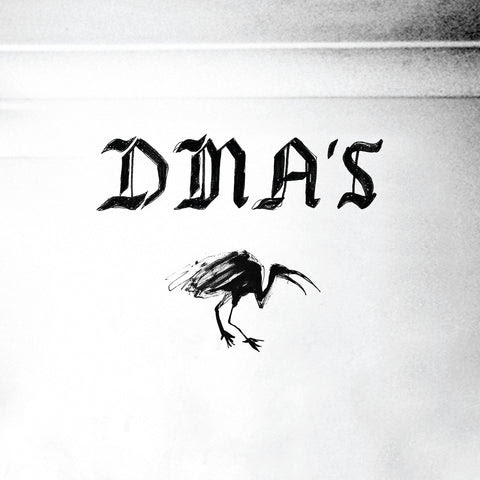 DMA's are the new, and in my opinion, worthy edition to our list of dramatic rock/pop songsters.  The young Australian band's introduction to US audiences occurred this month via the six-song self-titled EP on the Mom + Pop label.  With three skilled songwriters, a feel for the Manchester sounds of Oasis and The Stone Roses, and evocative vocals, Tommy O'Dell, Matt Mason and Johnny Took have a sound that has an undeniable appeal.  Tracks "Laced" and "So We Know" have received the most press, but I'm of the opinion that early single "Delete" is the best performance of the set.  DMA's know how to translate indie pop aesthetics to the big arena, and they deliver it with style.

We featured a single from UK indie pop band Seabirds a few years ago, but hadn't heard from them again.  We don't need to wonder what they've been up to any longer, as they will be releasing debut album Meet Me In The Silence later this year via Matinee Recordings.  You can have your first taste with "Independent Horses".  A smashing up-tempo tune with ringing guitars, it leaves no doubt that this album will be a big pleaser for indie pop fans.

I do love peanut butter.  I'm also quite fond of Peanut Butter, the second LP from Welsh band Joanna Gruesome.  And with its release, we finally, we have answers for the pressing questions of the day: Are JG still a good pop band? Are they still adept noisemakers?  Are they having a sophomore slump? Is Joanna still Gruesome?  The answers, for those keeping score, are "yes", "yes", "no", and "what?"

Joanna Gruesome's reputation is built on their fiery blend of punky noise pop, spiky post-punk and syrupy pop music, often all in the same track.  And as it worked so well before, we were happy to see that the band found no reason to abandon their core competency.  If one wants to track changes, one might note that the songs are a bit tighter and more economical, and perhaps each element is punched up a bit.  The latter aspect, with the pop sweeter and the noise, well, noisier, perhaps doesn't seem like the most obvious path as it makes the sound a bit rawer.  Personally, I think it is genius.  Rather than a blend of Joanna Gruesome's noted features -- which would have been the safe choice to offer their fan base -- we have ten songs that jump out of the speakers, get in your face and say "this is what Joanna Gruesome is, love it or leave it".  And while you are thinking about that image, they go to the kitchen and drink your last beer.

So yes, this Peanut Butter comes in rich layers of crunchy and creamy styles with pockets of jam.  Our serving suggestion is loud with plenty of liquid bread.  It may become your go-to after work meal.

Peanut Butter is out now via Fortuna POP! in the UK, Slumberland Records in the US, ant Turnstile Music everywhere else.

"Cry At Your Leisure" from Skittle Alley

Some bands are so good that we happily play their demos.  You think we're kidding?  Cast your eyes below to the clip for "Cry At Your Leisure" from Skittle Alley.  Yes, it clearly is marked "demo", and it isn't the first demo from France's Skittle Alley that has featured on these pages.  This one is a lovely song with chiming guitars and achingly sweet vocals.  You'll find more to love at the Soundcloud link at the bottom of this post.  Our prior posts for Skittle Alley are here and here.

Here is one of my favorite videos of the year so far, for "Dead Fox". one of my favorite songs from the stellar Courtney Barnett debut Sometimes I Sit and Think, and Sometimes I Just Sit (our review here).  Courtney mulls over the worth of organic vegetables, the dangers of highway driving (for humans and animals) and mortality.  The artists put it all on the screen vividly, and graphically.

Mikal Cronin is a master at crafting powerpop songs, with hooks and melodies that make you feel good.  On his third album, the rather directly titled MCIII, he continues to widen the scope of his offerings.  He provides multiple layers of sounds with keys and strings in the mix, and swells that tickle the rafters.  And the swells sound even bigger when contrasted with the occasional dips in volume.  This is well-conceived and well-executed pop music that is cinematic and energizing from the initial strains of opener "Turn Around".  The following "Made My Mind Up" is top class power pop of The New Pornographers variety.  "Say" and "Feel Like" continue to pump out the big sound.

The pace and tone changes beginning with the fifth track, "Been Loved", a nuanced balled and, for my money, the best quiet moment on the album.  It also provides the transition to the six linked coming of age pieces that comprise the remainder of MCIII.  "(i) Alone" is one half whisper and one half noise pop; at the moment, I prefer the latter.  "(ii) Gold" combines power pop and garage in a fashion similar to Cronin's work with his old partner Ty Segall to highly satisfying effect.  And just as I was putting a "+" in my notes for the preceding track, "(iii) Control" jangles in to steal my heart; that one could be a single as well.  A more garagey version of power pop is on offer with "(iv) Ready", again recalling Cronin's earlier San Franciso days.  "(v) Different" brings back the strings for a languid ballad.  The closing "(vi) Circle" is a fitting closer, combining mid-tempo jangle pop with reflective lyrics and piano.

MCIII is a very satisfying album from a songwriter and musician who is accomplished by still growing.  This is one of the highlights of his journey.

MCIII is out now via Merge Records in digital, CD, cassette and vinyl formats.

Video for "The Legend of Chavo Guerrero" by The Mountain Goats

The Mountain Goats' new album, Beat the Champ, has been out for about two months now, and we still are enjoying it.  But we now have even another way to celebrate one of its great tunes, as there now is a video for album song "The Legend of Chavo Guerrero", which includes Chavo himself.  The song is very good, and this video is quite special.

Here is your introduction to West Thebarton Brothel Party.  You don't need a personal invitation to attend this one.  Just have ears, a love of rock music and the ability to navigate yourself to whatever garage these guys have taken over to start the party.  There doesn't appear to be much recorded output available, but the Adelaide band will have an EP out soon via Mirador Records.  One of the songs from that record, "Misophonia" is out as a single, and it is too good not to share.  In fact, it is so good that we'll give you the stream and the video.  If there were an interpretive dance, we'd give you that too.

The song has just the right combination of musical chops and just-about-to-fall-apart chaos.  And you can feel the fun floating in the airwaves.

I needed some help getting going this morning.  And our new LA friend Kevin Hunter had just what I needed.  Kevin, who is an experienced hip hop/electronic producer, is releasing his Wild Things EP one track at a time, and giving fans the opportunity to download them for free.  The current song is "Fire Burning", which is a blend of house, reggae 'fast chat' dancehall and EDM.  This stuff could replace coffee, although I still recommend both.  Listen below, and check out the download opportunity here.