The return of Brighton's beloved The Popguns in 2012 was warmly welcomed by indie pop fans.  But not content with adding a new drummer, a background singer and playing their old material, the band's return takes a big step forward this year with the release of new music.  If Pop Fiction, the LP to be released near the end of the year is the main course, then this month's Lovejunky 7" is the perfect appetizer.  The title track is the sort of up tempo guitar pop on which The Popguns earned their fame: Note perfect and sincerely affecting vocals over loud guitars and muscular power chords.  I don't know about you, but if The Popguns and I were standing in a downpour and Wendy started singing about what a sunny day we were enjoying, I might start applying sunscreen.  One of the dual B-sides, "Long Way to Fall", is a top track in its own right.  "Home Late", the second B-side, The Popguns change pace for a gentle and sweet closer, featuring female vocals over an acoustic guitar.  Few bands have enough writing prowess to create tracks such as "Long Way to Fall" and "Home Late" as B-sides.  However, note that the B-sides won't be on Pop Fiction, so you can only have them by acquiring the Lovejunky 7".

The Lovejunky 7" is officially released on October 12 by Matinee Recordings.  But pre-orders are now available, and releases like this tend to be snapped up all too quickly.  If you wait, the vinyl will be gone.  Fortunately, it also is a digital release. 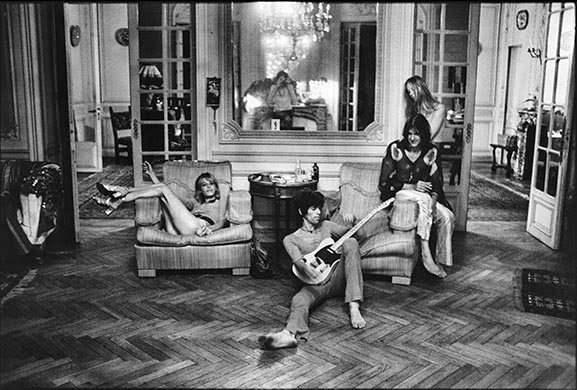 REVIEW: Flowers - Do What You Want To, It's What You Should Do

As a practice, I try to avoid hyperbole.  I write posts about music quite frequently, and I'd have no credibility if I proclaimed every guitarist or vocalist to be the best I've heard, or every album to be at the top of my list for the year.  So it is with studied care that I write that if I were to hear an angel's voice, I would expect it to sound like Rachel Kenedy of  London trio Flowers.  I've had the feeling before  -- no, not delusions of speaking with angels, but rather of angelic voices -- via Elizabeth Fraser of Cocteau Twins.  But unlike the venerable Scot, Kenedy's songs on their debut album,  Do What You Want To, It's What You Should Do, are teamed with the indie pop sounds of her bandmates Sam Ayers and Jordan (sorry, I don't have Jordan's surname).  While the sound isn't inventive, it is a well executed brand of guitar pop that many indie fans, including me, seek out.  And the pairing of Kenedy's vocals and the, to be a bit lazy, C86 style of music is the pairing which makes this album special enough to recommend.  The instruments and melody support the vocals without overwhelming them, and provide a familiarity which is both comforting and avoids distracting you from the vocals.

The streams for "Joanna", "Drag Me Down" and "Stuck" are provided below, but based on my evaluation there are a number of other songs of the 14 on the album which are at least as worthy to showcase the quality of the band's efforts, including "Forget the Fall", "Lonely", and "Anna".
September 8.  The growth of this band, from demos circulating on the Internet just last year to this debut album, is remarkable and encouraging.  Perhaps it is time to decorate your ears with some Flowers?

Do What You Want To, It's What You Should Do is out now via Fortuna POP! in Europe and Kanine Records in the US.

In general, American college kids are pretty predictable -- sleep, classes, parties, hook-ups, beer, football games.  They can live their lives that way because that's what college kids do, and no one can criticize them because, well, that's what college kids do.  However, every now and then someone comes along to raise the curve.  And today's someone-raising-the-curve actually is two someones, namely Jack Staffen and Eliza Callahan.  Jack is a sophomore double major in history and political science at New York University, and Eliza is a sophomore double major in visual arts and English literature at Columbia University.  But that isn't enough for this duo.  They also write and perform music as Jack + Eliza, have signed to Yebo Music (which also released the latest album by The Pains of Being Pure at Heart), and have just released No Wonders EP, their debut record.  And while some may be tempted to resent these over-achieving New Yorkers, I'm not.   You see, the No Wonders EP is melodic, nostalgic, sunny and almost indescribably cute.  The vocal harmonies recall The Mamas and Papas and the Beatles.  The jangling guitars underscore the '60s vibe.  And the delivery is cool and unaffected.  As I said, it is cute; and cute is good in this case.

The first of the EP's five tracks is the standout "Secrets" (video below).  With gorgeous harmonies and twanging and jangling guitar accompaniment, it should be irresistible for any pop fan.  The dreamy "Hold the Line" (stream below) cements the duo's jangle pop credentials, and features a delightful call and response vocal.  "So Open" is a heart-on-the-sleeve '60s nugget.  The penultimate track, "Floodlights", initially competes with "Secrets" as the track which most recalls The Mamas and Papas, but shows a more modern face as it unspools.  In the closing track, "Heading West", Jack and Eliza recall the best work of She & Him, or the first album from Seattle's The Young Evils.

It is over fast, but you'll be all two happy to replay it multiple times.  Jack + Eliza focus on songwriting (Eliza won the John Lennon songwriting contest at age 15) and vocal interplay.  There isn't much of that around these days, and I suggest we all treasure it. 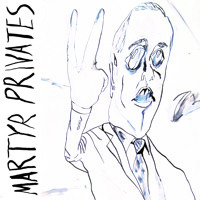 Martyr Privates' new self-titled debut album is not the shy, retiring type.  Make no mistake, it isn't a friendly puppy dog, either.  But this records growls, stomps and swaggers through your cranium like it owns the place.  And fortunately, the invasion is likely to leave you happy and satisfied.  It is the kind of psychedelic rock that dwells in noise, chunky drone and expertly curated grime -- more The 13th Floor Elevators filtered through '80s-'90s alt rock than the acoustic side of Jefferson Airplane.  You know, hammers instead of scalpels and all that.  But from the opening chug of album opener "Someone's Head", I was impressed with this band's clear-eyed and unfussy vision of rock and roll.  The sound is full, but there is nothing extraneous.  There also is nothing to tie you to current trends in music. No synths, samples, or guests, and certainly nothing you'll hear on mainstream radio or by a contestant in a blind audition for the voice.  And that is one more thing to treasure about Martyr Privates -- it is our album and we don't have to share it with pre-teens and Madison Avenue ad agencies.

Martyr Privates is a Brisbane trio consisting of Ashleigh Shipton (bass), ex-Slug Guts member Cameron Hawes (vocals and guitar), and Sam Dixon (drums).  Martyr Privates is available now in digital and vinyl formats from Bedroom Suck in Australia and New Zealand, and Fire Records elsewhere.  And as an aside, I'll observe that the partnership between Bedroom Suck and Fire Records is an incredible boon to indie music fans.  Bedroom Suck is one of the finer little labels around, with their finger on the pulse of vital underground Australian music.  Fire Records comes to the table with a distribution and support reach that labels the size of Bedroom Suck cannot generate, couples with Fire's proven excellent taste in music.

"And It Grows" from Cool Ghouls

It is always a happy event to learn that San Francisco's Cool Ghouls is about to release new music.  As we announced a few weeks ago when we previewed album track "The Mile" (link), the band will release A Swirling Fire Burning Through the Rye on November 11 via Empty Cellar Records.  A second song, "And It Grows" has just been made available.  It proves that Pat Thomas, Ryan Wong, Pat McDonald, and Alex Fleshman make some of the best psychedelic garage rock on today's scene.

I'd love to tell you more about American Wrestlers, but other than they are from St. Louis, they have this excellent track named "I Can Do No Wrong" floating around the web and available on Bandcamp for 'name your price', and they recorded a cassette which presumably is available, I don't know anything.  But if you enjoy the song, download it and send them a dollar so they can make more music.