Get to Know: Schonwald

Schonwald is an Italian duo consisting of Luca Bandini and Alessandra Gismondi. They play an icy brand of shoegaze that is both interesting and distinctive. My research indicates that they release an album named Amplified Nature in 2009, but I've not been able to find much about the album or the group. However, they recently signed with Chicago label HoZac Records, so we're likely to get more music from Schonwald in the future. In the meantime, enjoy this wonderful "Mercurial".
mercurial by schonwald

The Honey Pies are a group that believes popular music should be fun. And they deliver. The Adelaide, Australia foursome were featured in one of my Midnight World Pop Scout features earlier in the year. They attracted my attention with energetic, well-crafted britpop and their humorous riff on the actor Gary Busey. Today, December 16, The Honey Pies released their second LP of 2011, Carpe Carp. As indicated by the album title and the cover photograph in which the band is decked out in power ranger costumes, their sense of humor hasn't vanished. As for the music, the album is an exuberant collection of Britpop, bar room romps and other slightly twisted versions of recognizable styles, all with harmonies and fun lyrics. Listen to the first four tracks, "Vespa", "Romeo", "Girl", and "My O My O Me O My" at the Bandcamp link below and I think you'll understand why I'm encouraging you to give The Honey Pies a try.

But before streaming the album on Bandcamp, here is the video for track three, "Girl" --


The remainder of the album delivers additional songs in the vein of the first four (e.g. "Guy Fawkes Day", another favorite), alt rock ("Henny Penny"), a touch of vamping glam ("I Heart NY" )even a bit of country (e.g. "Houndstooth"). And try "Rubix Cube" for a slice of the lads' semi-sensitive side.


The Honey Pies are comprised of Jon Marco (rhythm guitar), Tony Marshall (lead guitar), Tom McCarthy-Jones (bass guitar), and Marcus Warnecke (drums). They enlisted the help of additional players, including horns and a choir, to flesh out their inspirations for the Carpe Carp. By the way, the album is dedicated in loving memory of Australian comedian Shaun Patrick Micallef. My brief research shows that Mr. Micallef is not deceased, so we're not clear on how he feels about this honor.

I can't decide what is better on this 1966 gem, the lyrics or the vocal. Ladies and gentlemen, this week's Soul Corner presents the late great James Carr:
Posted by Jim Desmond at 12/16/2011 4 comments: Links to this post

James Low grew up in the remote small town of John Day, Oregon, but for many years has lived in Portland where he is one of the stalwarts on the thriving local singer-songwriter circuit. His brand new 8 song CD presents some of the best work of his career.
Whiskey Farmer follows the sad trajectory of a character who, as Low explains on his web page: "Has always done things kind of right- did OK in school, went to a generic college, racked up a shitload of debt, and got a job to pay off the debt. He drinks to forget. He alienates the ones who love him best, and just cannot believe that this is all there is to life."
Low intends to make a film for all 8 songs on the CD, and here's the first, "Thinking California":
Much of Low's previous work is in a roots rock vein, while this is more of a singer-songwriter effort with a whole lot of old school country flavor. Low's highly capable band of 3 years, The Western Front serve the songs well. What I like best about this CD, on top of the outstanding songwriting, is the singing. Low is an experienced vocalist who has gotten far more intentional in his craft over the years. A young guy will throw down some drinks backstage and then just get up there and let it go. But Low is one of those singers who, like Elvis Costello and Joe Henry, as his career progresses, takes every note and tone seriously and brings some real craft to his vocals in tremendous service to the lyrics and emotional weight of the song.
And while the songs on Whiskey Farmer are sad and heavy, the melodies and warm musicianship make Whiskey Farmer a highly listenable and enjoyable CD. Producer Mike Coykendall (M Ward, Richmond Fontaine, Blitzen Trapper) gets a terrific sound here.
I find myself drawn to this "whiskey farmer" character, concerned about what will happen to him, intently turning the next page as it were to follow his story.
These songs will stick with you.
Listen here:
Artist web page: http://www.jameslowwesternfront.com/
Posted by Jim Desmond at 12/14/2011 No comments: Links to this post

I haven't found out much about San Francisco's Pink Films. Admittedly, I haven't gone into stalk mode, but I have some pride. Really, I do. I was able to learn that one of the members of the band is Andy Pastalaniec, who also is a member of a band called San Francisco Water Cooler. The sound is a garagey psychedelia, but has a poppy strain as well. It all sounds promising to me. 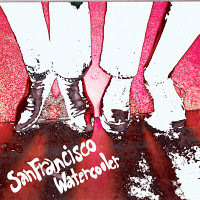 San Francisco Water Cooler blasts us with chainsaw noise pop with hints of psychedelia. The band rose from the ashes of Santa Cruz's Residual Echoes, and has released three albums of varying length on Sun Sneeze Records. If you like their music, check out the Sun Sneeze Records link below. If you want to check out a few more songs, hit the Soundcloud link.

Sun Sneeze Records
Soundcloud
Posted by Rocksteady74 (Scott) at 12/14/2011 No comments: Links to this post

Mash together power pop, indie pop and the Shangri Las, and you may get LA band Neverever. Jihae Meek, Wallace Meek, Shaun Puklavetz, Eric Fisher, and Sharif Dumani will have you moving your feet and wanting more. It is a bold and sunny California sound with lots of hooks and lyrics about teenagers growing up. The group is signed to Slumberland Records. (Note: Neverever should be distinguished from Australia's The Never Ever.)

In 2010 they released an LP named Angelic Swells. On January 17, the band is releasing a five-track EP called Shake-A-Baby. And if album track "Wedding Day" is any indication, it is a release to anticipate.
Neverever - Wedding Day by Slumberland Records

We profiled Glasgow band Fiction Faction earlier in the year. We liked their chiming guitars, and their fresh fusion of indie rock and electronic sounds. Some have likened their sound to a somewhat more pop version of The Cure. The gang is back in view with the October release of the Malenky Lizards EP on Glasgow's Saraseto Records. The stable four members of the group (they seem to be looking to add a keyboard player from time to time) are David (Rhythm Guitar, Vocals), Paul (Lead guitar, Vocals), John Paul (Bass, Backing Vocals), and Ellis (Drums, Backing Vocals).

The title track is the worthy centerpiece of the EP. Its fusion of pop and indie rock with a hint of blue-eyed soul evokes for me some of the finest moments of Joe Jackson. I've been playing it a couple of times a day for weeks.

The second track, "A Lot Can Happen On A Summers Day" has the tone and shading of a Cure song, but with a tempo built for the dance floor. The third track is a Miamoux Miamoux remix of a previously released track, "Apparations". I think it is well done, although I don't consider myself a connoisseur of remixes. The fourth and final track is "Harmonizing the Grateful", which favorably reminds this listener of David Bowie singing vocals for the Soft Boys.


You can stream the entire album here:


Malenky Lizards EP is worth your attention not only because it contains four good songs, but because it promises an exciting things for the future. The band is polished, the vocals are excellent, and the scope of the songs suggest a group willing to reach a bit to create music that means something to them.

Get to Know: Dunes

Dunes are fond of dark pop songs, and are creating a full LP of them for our listening pleasure, to be released in 2012 on PPM. The members of this Los Angeles-based band are listed as Stephanie (aka Stoof), Mark, and Katelyn (aka Beato). They have released an EP on Mexican Summer and a 7" on Art Fag Recordings.

"Tied Together", a video made with help from the bands No Age, Vivian Girls, Abe Vigoda, High Places, Telepathe, Cold Showers, Nodzzz, Bleached, Pangea, Shannon and the Clams, and Devon Williams Band--

Dunes - "Tied Together" from stereogum on Vimeo.