As spring inches nearer for the residents of the Northern Hemisphere, various seasonal tasks crowd the schedule. We know this because we have commenced cleaning our closets. UK musician Mike Gale, the former frontman for Co-pilgrim, has been cleaning out his closets too. But unlike the WYMA staff, which has found questionable treasures such as old and seldom worn jackets, pants that mysteriously became too tight, and a Christmas sweater too ugly even for ugly Christmas sweater events, Mike has found 11 songs that haven't fit on previously released recordings. Mike has correctly surmised that some or all of these songs could find a good home with people who enjoy a well-crafted pop tune. You could consider them 'rescue tunes', but Mike has called the collection B,C,D sides Vol 1 (truthfully, we like "rescue tunes better). The collection is available for 'name your price', so dig in and see what strikes your fancy. We have included a few of our favorites below.

"Love Must Conquer" by Kluster B

The release date for b, the second LP by Malmo, Sweden's Kluster B remains a little over a month in our future, but today we have the lovely and positive "Love Must Conquer", which is one of the more gloriously pop-oriented tunes we have heard from this talented five-piece. We know that many delights await us with b, but for now, we will cheer for love conquering.

The Hanging Stars - A New Kind Of Sky 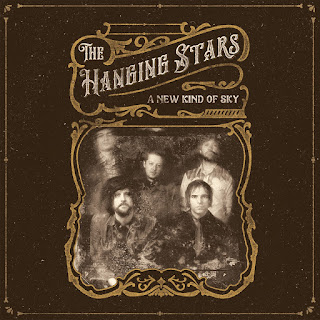 Cue up A New Kind Of Sky, close your eyes and listen to terrific country garage psych/pop, or, if you prefer a more concise phrase, cosmic country rock. You may feel transported to California or Austin in the '70s. You may envision cool desert nights and warm breezes under sunny skies. Well, we don't relish spoiling any good daydreams, but this tasty album is the work of London band The Hanging Stars. While the songs represent a triumph of the songwriting craft, the sincere and nuanced performances elevate each one to true gem status. Infused with humanity and carried by melody and harmony, this is an album you will turn to again and again. 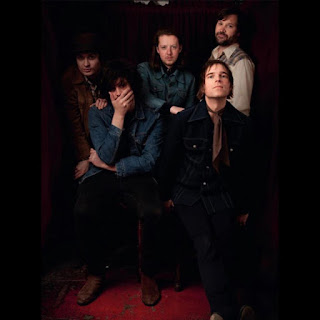 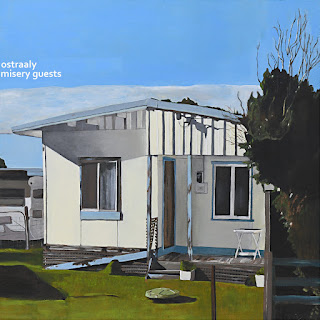 We can't stop playing Misery Guests. But we can't say that we have tried. In fact, we don't find its prominence on our office music system to be a problem for us because we don't want to stop playing Misery Guests. In a style that we can best describe as Australiana pop with a folk vibe reminiscent of  Fairport Convention (and dare we suggest, the spirit of The Band), the album is the debut full length from Melbourne band Ostraaly. The songs are varied, with just the right mix of whimsy and darkly shaded humanity. If you like variety in your music, this album should be your next purchase. And if you are stuck in a rut of always listening to the same style, this album may be your guide star to a richer musical experience.