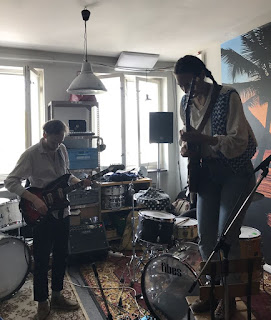 We are pleased to introduce you to Guds Pengar, or "God's Money" if you would like the translation from Swedish. The introduction arrives in the form of "Borttappad", their debut single for Rama Lama Records. Unlike many of the Nordic bands we feature here, Guds Pengar sticks to Swedish. But our lack of linguistic dexterity doesn't dim our appreciation for the thrillingly dynamic music the band creates.

The  Malmö-based Guds Pengar are Evelina Nerstrand and Olof Stid, and occasionally some like-minded musical friends.

We all want our favorite bands to go on forever, dropping nuggets into our laps from time to time. We want it as music fans, and we want the stability and comfort as humans. But, of course, things rarely work out as we like. We have been following Seattle-area band Math and Physics Club for about 15 years, and another 15 years would be most welcome. However, we recently learned that the band is wrapping up with a final single, the two-track Indian Ocean 7" available via Matinee Recordings.

Of course there is a backstory. There usually is with endings, although this one is especially poignant. Math and Physics Club co-founder and guitarist James Werle succumbed to cancer last year. Title track "Indian Ocean" was written before James died, but before it had not yet been recorded. So remaining members Charles Bert, Ethan Jones and Kevin Emerson recorded the song, as well "In Dreams", which was written as a tribute to James.  It is a truly memorable final statement, with sadness and hope, as well as a sublime craftsmanship. 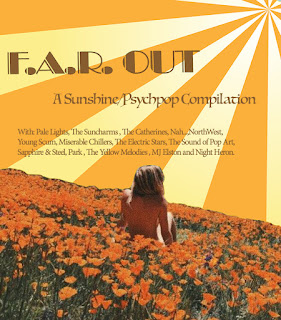 Unsure of what music to cue up next? Let us help you -- take a look at F.A.R. Out, a new compilation from Fadeawayradiate Records. Featuring 14 original songs by various indie artists that were selected for quality and fit with the theme of '60s-style sunshine pop. Astute readers will note that several of these artists have appeared on these pages in the past. It should surprise no one that we are drawn to them again. The CD version is sold out, but the digital is there for the taking. 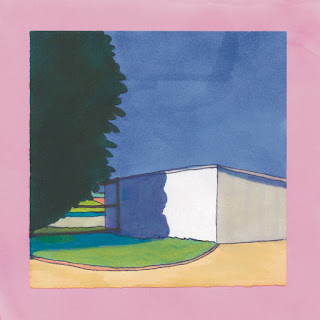 Brisbane's Dumb Things have delivered Time Again, their sophomore album, and a fine addition to jangling slacker pop it is.  Breezy and carefree, it demands nothing of the listener but delivers great joy. We discovered it only recently, but it has become one of our favorite albums of the fall. Fans of Dick Diver, Twerps and other recent Australian bands should dive in without hesitation. But really, we recommend Time Again to any guitar pop fan.

Dumb Things are Pat, Maddie, Adam, James, and Andy. And based on the quality of the album, we'd venture that they may be Dumb Things as a collective, but they certainly aren't things that are dumb

Time Again is out now in CD and digital formats.


Facebook
Bandcamp for Time Again
Various links for Dumb Things music
Posted by Rocksteady74 (Scott) at 11/26/2019 No comments: Links to this post 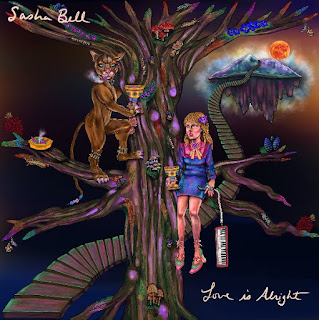 Sasha Bell's confident, nuanced vocals, musicianship, and gifted songwriting have graced bands Essex Green, Ladybug Transistor and The Sixth Great Lake, so it is always good news to hear that she is involved in a new project. But this endeavor is particularly special, as it is her first solo full length under her own name. Listening to Love Is Alright we happily to discover that Bell clearly is comfortable as the main focus of a project. Her vocals are assured and dynamic. The sparkling arrangements find a comfortable lane between the more baroque pop of her other bands and more mainstream pop. Lyrically, Bell hits memorable points in her life and career. But this is nostalgia that is warm and sprightly, matching the presentation and lifting our spirits. We don't think Sasha Bell could have crafted a better opener to this chapter of her musical journey.

Love Is Alright is out now via Both Sides Now.


Facebook
Bandcamp for Love Is Alright
Posted by Rocksteady74 (Scott) at 11/26/2019 No comments: Links to this post 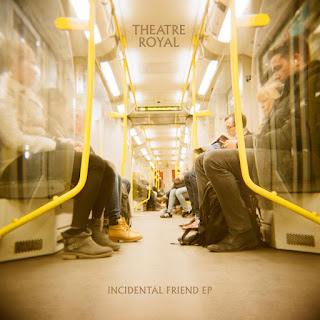 In July we featured a singles collection from UK UK four-piece Theatre Royal. We understand that they are planning an album release in the new year, but are bridging the time span with the four-song EP Incidental Friend. We think the EP gives listeners a good look at the various facets of the band's talents. The title track is a mid-tempo look at a friendship. "Turn From Sleep" displays the band's rocking side. "Done Is Done" invites a sing-a-long in any live setting. Album closer "September Comes" is high drama post-punk. And, of course, everything is quite melodic and well-performed.